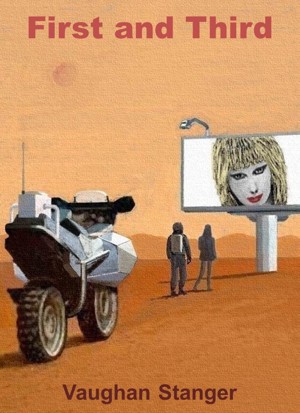 This is what Sam Tomaino has to say about it in his review of Postscripts 26/27 "Unfit for Eden" at SF Revu (26 March 2012): "'First and Third' by Vaughan Stanger – Joe loves Maisie, even though she's dead. He keeps her mind alive, downloaded on some sort of server. He wants to keep her going until she achieves something called Rapture. It would take too long to explain the intricacies of all this. He makes a living on Mars repairing robots, but he's on the run from the law. Things get more complicated after that. Joe and Maisie are characters you'll like and that's enough for any story."

Until recently, Vaughan Stanger worked as a research manager at a British engineering company. From 1997 to 2011, he wrote science fiction and fantasy stories in his spare time, effectively setting himself homework. The results of this head-scratching were published in Nature Futures, Interzone, Postscripts, Daily Science Fiction and Music for Another World, to name but a few. Translations of his stories have appeared in Polish and Hebrew.

In January 2012 Vaughan became a full-time writer. Currently he's busy writing a hard SF novel (hard in both meanings of the word). The head-scratching has got worse if anything. There are also some new stories in the works, plus further e-book compilations of his previously published stories to come.

You have subscribed to alerts for Vaughan Stanger.

You have been added to Vaughan Stanger's favorite list.

You can also sign-up to receive email notifications whenever Vaughan Stanger releases a new book.