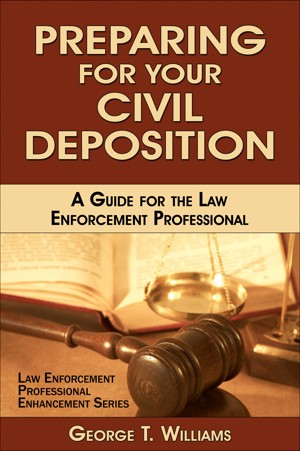 Preparing for Your Civil Deposition; A Guide for the Law Enforcement Professional

Every moment of preparation for your deposition testimony will pay huge dividends in your performance and better influence the outcome of the verdict. The comprehensive step-by-step advice in this book assists you in preparing to testify to the best of your ability in any civil (or criminal) deposition. This information is based upon the advice of some of the best police civil defense attorneys in the business combined with the experiences and lessons-learned of an expert witness with over twenty years of defending officers in civil and criminal courts across the nation.

Topics you will learn about:
-- The areas to focus upon during your preparations and study that will have the greatest impact on your testimony.
-- The conduct of the deposition process itself.
-- How testimony in civil processes is different from your criminal testimony experience.
-- Why your testimony should be about the context of the event as much as about the facts of case.
-- Common plaintiff’s experts’ theories and how to defend against their assertions.
-- Language and terminology.
-- Plaintiff attorneys' theories and strategies.
-- What to expect at the deposition (including opposing attorneys’ dirty tricks).

The deposition will set up your testimony in the civil trial in front of the jury. This is your chance to provide solid, accurate, and very importantly, comprehensive information about your decision-making, actions, and behavior. Without exception, officers who prepare well for their depositions tend to do well facing even the best attorneys, thus assisting in the defense of their own cases. Those who fail to ready themselves rarely do as well, and sometimes literally lose what might have been a winnable case for themselves and their agencies. The result and effectiveness of your deposition testimony is largely up to you.

Instead of wandering through this civil-litigation wilderness alone and in the dark where the deposition threatens to derail your defense, utilize the tools offered in this book to demystify the process and guide you through the preparation for your testimony. The non-technical, conversational manner allows you to quickly gain familiarity with the process, and to take the steps necessary to make a difference in your own defense. That’s the reason for this book; so that good officers who reasonably do the job the way they are trained and who put themselves in harm’s way for others can prepare for their day in court.

Mr. Williams is a highly sought after police procedures expert witness who has seen the best and the worst of deposition testimony over the past two decades. His down-to-earth, nuts and bolts approach makes for an easy read as well as a useful how-to guide through the complicated, and sometimes murky process of the civil deposition.

Excelling in your testimony will be no accident. After your deposition testimony, you’ll be relieved it is over, and happy to have found this book.

George T. Williams has been acting as a compensated expert witness since 1991. He is accepted nationwide as an expert in federal, state, and municipal courts, as well as in employment arbitration hearings. He provides testimony in many diverse areas of police litigation, including police force, deadly force, procedures, tactics, pursuits, Police Service Dog, patrol, SWAT, and jail cases.

Mr. Williams is a nationally and internationally known trainer and innovator of police force skills and programs including firearms, defensive tactics, impact weapons, aerosol restraint systems, arrest and control, and TASER (registered trademark). He routinely presents officer safety and survival classes nationwide, and has trained dozens of SWAT teams in his career. He is widely known for his civil liability prevention training, and ability to distill force law into applicable knowledge for the average officer.

A prolific author, Mr. Williams offers original thinking in police tactics and force response through his writing. He has authored over 200 articles in such prestigious publications as the FBI’s “Law Enforcement Bulletin,” the National Tactical Officers Association’s “The Tactical Edge,” the International Chiefs of Police “The Police Chief,” “Law & Order,” “The Police Marksman,” the International Association of Law Enforcement Officers “The Firearms Instructor,” and many more. His first book, “Force Reporting for Every Cop” (Jones and Bartlett, Boston, 2006), is a valuable tool in developing an officer’s reporting skills.

You have subscribed to alerts for George T. Williams.

You have been added to George T. Williams's favorite list.

You can also sign-up to receive email notifications whenever George T. Williams releases a new book.