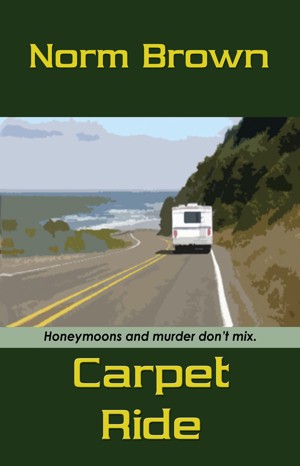 A native Texan, Norm Brown lives and writes in the beautiful and rugged Texas hill country. Home of the Bluebonnet wild flower and the red scorpion.After a long career exploring the mystery of computers, Carpet Ride is his first novel.

Newlyweds Sam and Lynn Stanley embark on a cross country RV honeymoon with Lynn’s young son Andy. However their trips turns more eventful than they bargained for when they suddenly find a barely passable mountain trail blocked by what appears to be a large roll of carpet.

They have no choice but to run over the object, sending them out of control as Sam narrowly avoids sending them careening over the cliff to their deaths.

As Sam gets out, shaken, to investigate the object they ran over the reader gets the first hint there might be more to this scene than meets the eye.


Arriving at their new home, they find a police car waiting in the driveway for them. Officer Jenson of the Oregon State Patrol has already contacted Lieutenant Banyon to bring Sam in for questioning concerning their accident. Sam goes with the officer, leaving his new wife and her son to unpack.

At the police station Sam learns that he is being accused of running over a person in the road, is possibly facing charges, and there is no sign this carpet ever existed. The victim’s car, a Ford Taurus, was discovered at the scene with a flat tire and open trunk, suggesting that Robert Riddlin may have been walking in the road looking for help when Sam ran him down.

But how could this be?! There had been nobody in the road! Sam was sure of it!

From there things get stranger. Sam’s wife suffers an accident that could have killed her and he discovers strange coincidences that leave him certain someone is trying to kill him.


Sam’s friend John Canton goes to Boulder, Colorado to investigate the strange events from what him and Sam think is the source, the victim Robert Riddlin. There, he finds himself any ally in Cynthia Kildeer, Robert’s administrative assistant.

The two investigate, but seem to find more questions than answers.


Meanwhile, at home Sam tries to keep himself and his new family safe, finally falling on his wife’s old friend Martin to provide a safe haven, who we later learn has secrets of his own.


You quickly find yourself asking questions. What really happened to Robert Riddlin? Who is trying to kill Sam and why? Will they discover John’s deception and come after him too for play amateur sleuth?

Norm Brown takes you on a carpet ride of suspicion as you find yourself suspecting everyone who is deeply involved until the truth finally plays out at the end. This was an enjoyable read.

While the end comes as no surprise, all the hints were there, it is not so obvious that you figure it out halfway through the book.

I would have liked to get more explanation behind the whole Robert Riddlin affair, however there are more mysteries to the story than that, and Riddlin is more of a driving force to push the story forward and not the reason Sam and Lynn have been chosen to be pulled into their situation.

Sam Stanley’s got everything going for him—new bride, delightful one-year-old son, new house and job to go home to, and the perfect honeymoon driving through pristine forests between Oregon and California. But everything starts to fall apart when he almost wrecks the RV on a narrow winding road. The rolled-up carpet in the middle of the road probably fell off a van… or something.

Author Norm Brown renders Sam’s thoughts perfectly in his novel Carpet Ride. The characters are comfortable, the conversation’s pleasing, and the sudden blows of trouble falling on trouble are genuinely surprising, gluing the reader to the page.

Sam’s friend John soon becomes convinced Sam’s run of bad luck isn't just coincidence. Murder, fire and mayhem ensue as Sam tries to save his new family in Texas and John investigates mysteries in Colorado. The stories come back together in a truly exciting scene in the wilds of Texas, and even a reader who loves to try to guess the resolution too early in the tale will enjoy watching this mystery twist and turn. Action, adventure, mystery and romance rolled into one, this Carpet Ride is one wild ride and a thoroughly enjoyable read.

Disclosure: I received a free ecopy of this novel from the publisher in exchange for my honest review.

You have subscribed to alerts for Norm Brown.

You have been added to Norm Brown's favorite list.

You can also sign-up to receive email notifications whenever Norm Brown releases a new book.