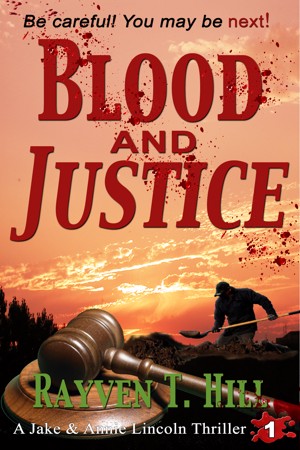 By Rayven T. Hill
Rated 3.67/5 based on 3 reviews
When the search for a missing teenager leads them into a white-knuckle hunt for a serial killer, private investigators Jake and Annie Lincoln find themselves shaken out of their comfort zone.

As more bodies pile up, the town is gripped with fear. It seems no one is safe, and the Lincolns race to solve an impossible puzzle before they become the killer's next victims. More
When sixteen-year-old Jenny James goes missing, and the local police are unable to find her, the girl's frantic mother hires private investigators Jake and Annie Lincoln to search for her daughter.

When the body of Jenny's boyfriend is discovered, the mystery of her disappearance deepens. Shaken out of their comfort zone of Internet searches and poring over public records, the couple soon find themselves facing the frightening possibility they are looking for the latest victim of a serial killer.

Rayven T. Hill was born in 1954 in Markham, Ontario. He has had a variety of occupations and careers since then, spending the last fourteen years as a computer programmer and web site designer.

His first novel, written in 1960, was an instant hit with his mother and one sibling. He then put his career as a novelist aside for half a century to concentrate on making a living, but has now ventured back into the world of writing.

His first real novel, Blood and Justice, was published as an eBook in June 2013.

He lives with his wife in Toronto.

Reviews of Blood and Justice by Rayven T. Hill

A pretty good story about a Dexter (the serial killer)-type character who kills people who've committed crimes, and in his mind, deserve to die. In the beginning of the story, he inadvertently kidnaps a girl and doesn't know what to do with her. The police, with the help of a couple of private detectives, have to find the girl and solve the murders.

We know exactly who did it pretty early on, although we find out the reasons why as the story progresses. The authorities are clueless, though, and it's fun to watch them try to catch up to what the reader already knows.

There are a few inconsistencies in the narrative. In one chapter, a crucial character lives in apartment 2B. In another, the same character lives in 3B. In one chapter, the housekeeper is a Latino woman; in another, that same housekeeper is Asian. In the introduction to one of the chapters, the time is given as "PM", but from the first paragraph, it's clear that this is in the morning, and the author meant to say "AM".

At a press conference, I couldn't make myself believe that a police detective, briefing a crowd of journalists, with his police chief listening in, would refer to the FBI as "the feds". And come to think of it, we hear that "the feds" have been brought in on the case, but we never see a fed after that, almost as though the author forgot that he'd said that.

There are also missing quotation marks at times, which makes the reader wonder if a character said a particular thing out loud or just thought it, but in the next sentence, it's obvious he said it out loud.

All these things are enough to yank me out of the story and put a significant dent in my suspension of disbelief.

The story itself I enjoyed, however. I read the synopsis of the next one in the series. I think I might just pick it up and give it a read!

A reasonable read, but editing out superfluous bits would tighten it up. We don't need coverage of dropping the kids off/picking up from neighbours etc if it does not contribute to the plot, which it does not. Writing style a bit simplistic.

You have subscribed to alerts for Rayven T. Hill.

You have been added to Rayven T. Hill's favorite list.

You can also sign-up to receive email notifications whenever Rayven T. Hill releases a new book.