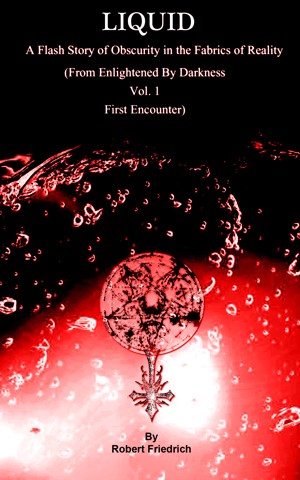 Liquid - A Flash Story of Obscurity in the Fabrics of Reality

Robert Friedrich, originally born in Slovakia, started his writing career in Egypt, where he has been living since his 13th Birthday. He always had a vivid imagination, but the courage to show it to the world came much later. It was't easy, and took some pain, guts and ton of misfortune to arrive to this point. After a time of aversion and a path of unexpected circumstances he harnessed everything within him and stepped up to do things which he really wanted, liked and enjoyed.

He is writing in a different range of formats, from lyrics, flash stories, and short stories and Novellas. Even though the horror genre, which is about the long lasting fight between good and evil, Robert took it to an entirely new level. Adding many psychological characteristics, open ends, confusing twists and new settings. All of which slowly developed as a new paradigm Sci-fi/Horror/Drama; enclosing also urgent issues and happenings within the life of individuals as well as humankind.
His approach can surely change the perspective of readers, not only widen but also illuminate the possibilities and ways. Illuminate them with Darkness unlike found in any other Fiction genre.

Besides writing, Robert also enjoys metal music, movies, and games. He builds his encyclopedic information bank in this reference and uses his experiences from a wide range of activities which he had to go through; multicultural behavior, stress control, diving, translations, marketing, hotel management etc. Robert also creates his own covers and trailers. He speaks English, German and a bit of Arabic, besides his native language Slovak.

In this abrupt flash fiction the author takes you on a terrifying journey through a metamorphosis. It's an interesting read.

This was my first experience with flash fiction. On the first reading, it sounded a bit stiff but given the length and the fact I enjoyed what I read, I gave it another go through. On the second I caught the rhythm of the words pushing the stiffness to the side. Very visual. My biggest plus point is at the end I wondered, well WHY? did all that happen. Which I suppose was the point and something I always appreciate. Worth the read.

Wow, now this was the freakiest and scariest flash I have read in a long time. Amazing, now I wonder even more what this talented author wrote.

That was different. I have to admit, I almost gave up on it, but the ending took it in another direction that is very interesting and left me wondering where it would go from here.

I enjoyed this flash fiction piece. I have to admit that I didn't quite get the end, but I'm still giving it five stars, because the descriptions were so vivid, like a movie in my mind as I read. Well worth your time if you visualise when you read!

You have subscribed to alerts for Robert Friedrich.

You have been added to Robert Friedrich's favorite list.

You can also sign-up to receive email notifications whenever Robert Friedrich releases a new book.