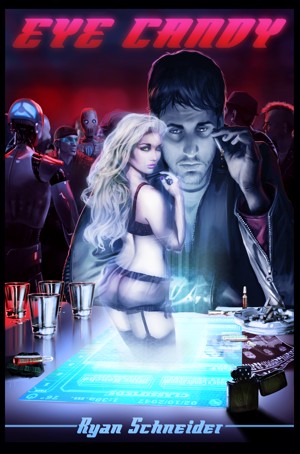 Packed with action, comedy, romance, and an ensemble of lovable characters, EYE CANDY is an uplifting roller coaster ride in the time of robots. More
Candy Calvin has it all. She’s a respected robopsychologist who specializes in the care and feeding of robots, particularly those belonging to Los Angeles’ wealthy elite. Her best friend Susannah helps Candy run her practice. The only thing Candy is missing is someone special with whom she can share her life. Until one day, on a whim, she visits an online dating site. She soon finds a profile she likes: ROBOSTUD2047. They agree to meet for dinner. But when Candy lays eyes on him, she gets more than she bargained for, including a trip into orbit, a midnight ride in a ViperJet, and a revelation that rattles her to her core.

Danny Olivaw is a renown roboticist famous for his books on the inner workings of artificially-intelligent beings. When he’s not writing, he flies his jet and hobnobs with celebrities and movie stars. His roommate Floyd is a screenwriter and actor who convinces Danny to try online dating. EYECANDYPh.D.D. immediately catches Danny’s eye. They agree to meet at Chateaux Pizza and before Danny can get over the statuesque beauty before him, she’s sampling his bruschetta and tasting his wine. Danny knows instantly that he’s head over heels for Candy. But things aren’t always what they seem, and Danny soon finds himself in a downward spiral in his quest to reunite with Candy.

Packed with action, comedy, romance, and an ensemble of lovable characters, EYE CANDY is an uplifting roller coaster ride in the time of robots.

I believe a story should entertain you, inspire you. Make you think. Make you feel. That's why I wrote Eye Candy.

It is now available worldwide.

I write fiction. I will make you think and feel. That is my job.

I am a husband, aspiring father, writer, and novelist.

I try to write stories I would enjoy reading.

My work is sometimes dark and heavy, sometimes light and fun, even romantic.

I co-authored "The Pillow Book" with Petal Darker.

I earned a Bachelor's degree in English Literature from the University of the Pacific. I have worked as a newspaper staff writer, a film critic, as well as co-host of a radio show. I studied screenwriting and independent producing at UCLA.

I have written 7 novels, many short stories, a dozen screenplays, and many essays. I also co-produced a 35mm short film.

I am also a commercially-licensed pilot with multi-engine and instrument ratings. I have flown various aircraft: Cessna 152, Cessna 172, Piper Arrow and Piper Seminole.

I live with my wife Taliya in Palm Springs. Taliya is a singer/songwriter and musician. Her music has been likened to Enya, Yanni, and Sarah McLachlan. Taliya plays guitar, piano, and flute. She was awarded a Guinness World Record for recording her original song "Flower Child" in 15 languages. She has toured much of Europe and the United States. She has written and produced two albums and is currently in the studio at work on her third album.

In 2013 I published the science fiction romantic novel EYE CANDY. Read it. You'll like it.

I also published THE DEMON DRIVERS TRILOGY BOOK 1 -- THE BEGINNING. It's all five books of The Go-Kids adventure series collected in one volume for the first time ever! Read it. You'll like it.

I am presently working on Book 2 of THE DEMON DRIVERS (coincides with book 6 of TGK), the epic tale of a thirteen-year-old boy named Parker who has the weight of the world on his shoulders, and the lives of his friends in his hands.

You have subscribed to alerts for Ryan Schneider.

You have been added to Ryan Schneider's favorite list.

You can also sign-up to receive email notifications whenever Ryan Schneider releases a new book.