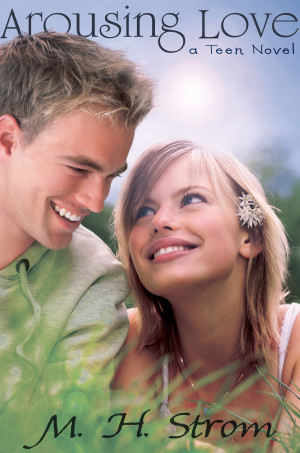 By M. H. Strom
Rated 4.11/5 based on 9 reviews
Zach knows Joanna is too young for him but he has never felt like this about anybody before - she is funny and sweet and flirty and free and the most beautiful girl he has ever known.
Joanna is swept away by her feelings for Zach as they grow increasingly passionate for each other. It's like God has whispered in her heart Zach is the one for her. Can it be true love when you're only fifteen?
Available ebook formats: epub mobi
Price: $0.99 USD
Buy Add to Library Give as a Gift
How gifting works
Create Widget
Tags: young adult young love teen ya first love boy falling in love teen romance teen love

The comment by Bekki Lynn makes some good points, but the author captured most of the intense emotions of that age that make you literally "ache" for each other . Given the simplistic venue of the Smashwords format she wrote an engaging work sufficient to rate 5 stars. Infact, some parts coincide with what I experienced before I got married.

I loved it so much!!

It was good, and covered a lot of bible there were a couple of places where I was not quite sure about: his parents seemed quite absent, and the end bit was a bit different but on the whole it was good. might get my child to read when a bit older.

(review of free book)
Krisztina hovorka reviewed on April 23, 2014
(no rating)
I thought it was sweet and charming especially as the book was written in the view of Zach. The religious,talks kind of teaches our something but sometimes it was a little to much. But I lived it and loved it hope it has a second book!!!!!!

i found it alright, however some of the religious conversations were a little over the top.

I really enjoyed this story for the most part. Zack and Joanna's relationship is very sweet for their ages and I think it would bring up fond memories for many. I will suggest this story to some of my friends.

Here's why I couldn't give it a five.

There were a few spots where I felt the religious conversations went overboard. Typically, fifteen years olds don't have opinions or real knowledge about abortion issues. They spout off what they've heard and been they must believe so when I hear it, I shake my head. At that age, I don't feel they are capable of having enough knowledge to form their own opinion.

The other part was the impromtu bible study at the campground. It was ok at first, but when Zack brought up gay marriage the whole thing turned into the author preaching rather than sticking with the topic at hand, marriage between Zack and Joanna. I think it if the topic was to be discussed, it could have done at another time once the current lecture had sunk in.

And it bothered me that her father, as religious as he was, didn't once quote the King James Bible.

I would have liked to have seen something toward the end of the story between Zack and his parents. They were pretty much left out of his life. He should have explained his intentions with Joanna, they should have met her parents before the wedding and so on.

I think a good editor or proofreader could have helped improve the writing of the story. 'so' was an over used word I noticed. 'alright' was used quite often and well, it's never accepted - it's not a word.

The last chapter jumped ahead an entire year - it should have been labeled as an epilogue instead of a chapter.

I was rather perturbed that we weren't allowed to see them grow and lose some of the immaturity they had. In this ending - I found the sex to be without real passion. Before when they'd kiss and get passionate, you could feel it. When they are finally allowed to make love on their wedding night, they simply lay down and do it - there is no passionate kissing, no kind of foreplay at all - they simply do it. Where was the pain of her losing her virginity?

Ok, religion and God are mentioned in the description...but at page 28 I couldn't read any more because it was all about Jesus, not teen love. I can't say for sure because I'm not going to read anymore, but I think that this book is only really suitable for those with *very strong Christian beliefs*

I loved this book. It really shows the ups and downs of a young Godly relationship. It even helped me realize a few slip ups in my own life. M. H. Strom is an amazing author and I can't wait to hear more!

This read is really good. Made me want to flip each page.

This is an great read

You have subscribed to alerts for M. H. Strom.

You have been added to M. H. Strom's favorite list.

You can also sign-up to receive email notifications whenever M. H. Strom releases a new book.