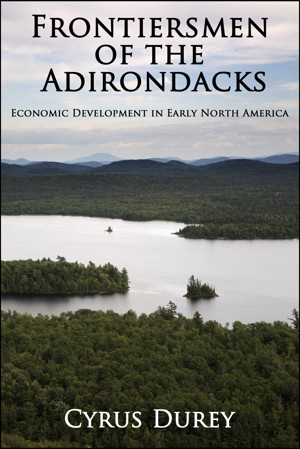 Frontiersmen of the Adirondacks: Economic Development in Early North America

By Cyrus Durey
Every community both of civilized and barbarous men has its traditional heroes. The memory of some person or other who in his time stood out sharply from his fellows is preserved by them in tradition or by the written word often with fantastic embellishments of his person or his acts.

We Americans know too little of the people of past generations who lived their lives in these localities. More
Reverence for the past and its principal actors tends to be universal and they become heroic figures to posterity in the passage of time.

These pioneers selected land for their farms and bore the hardships of an isolated and primitive life with the wild beasts always and the Indians often as enemies.

They finally fought a war with their kinsmen across the seas to establish their right to live their own lives in their own way without interference from the homeland. They made a new government that has served as a model for the entire world since.

This knowledge is vague enough with most of us but it is so generally diffused that it unifies the country in the consciousness of a common origin, a common surmounting of dangers and a common destiny. It makes for a patriotic citizenry.

When this knowledge is supplemented by adequate information concerning the history of country, state and their subdivisions down to the story of the neighborhood’s traditional hero, the patriotic reaction is deeper; resulting from the knowledge of these old time individuals’ doings that have a far-reaching effect on posterity for different reasons.

Cyrus Durey (May 16, 1864 – January 4, 1933) wrote a history of Fulton County, New York around 1920 regarding the colonial and revolutionary war periods from which this book is based upon.

He was interred in North Bush Cemetery, near Johnstown, New York.

The author had a large lumber mill on Canada Lake and split his time between Albany and his house on Pine Lake.

You have subscribed to alerts for Cyrus Durey.

You have been added to Cyrus Durey's favorite list.

You can also sign-up to receive email notifications whenever Cyrus Durey releases a new book.