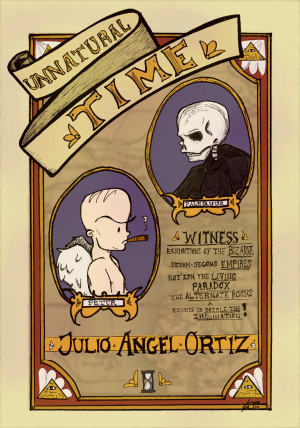 By Julio Angel Ortiz
Rated 5.00/5 based on 1 review
Mr. Kite's Cavalcade of Unnatural History tours the country, presenting unusual wonders and sights, but something more sinister is at work.

Julio Angel Ortiz is a writer in both print and electronic media. Julio has had an audio drama released for the original sci-fi series THE DOME and short stories published in collections by Obverse Books, as well as several eBooks available for Kindle, Nook, and other eReaders via his Vox Theory imprint. When not banging his head against his notebook in order to string words together, Julio works in Information Technology during the day and is also active blogging, posting on Twitter, and working at his photography.

I enjoyed this one immensely! Exquisitely written (not just the plot - the personalities were quite superb too). While I usually call for good short stories to be expanded on some more, I feel that these characters would be better served in a series of "cases" to solve, rather than one big one. Perhaps their pasts and personalities fleshed out more and more in a running backstory? In any case, kudos Julio =D

(review of free book)
calebblake reviewed on Dec. 26, 2010
(no rating)
Cool little story. The only thing I was disappointed about was that this could've really been fleshed out to be a great novella.

Peter and Palequus were great characters that I'd like to know more about and I could have enjoyed Mr Kite's Cavalcade of Unnatural History as a setting for a bigger story.

You have subscribed to Smashwords Alerts new release notifications for Julio Angel Ortiz.

You have been added to Julio Angel Ortiz's favorite list.

You can also sign-up to receive email notifications whenever Julio Angel Ortiz releases a new book.