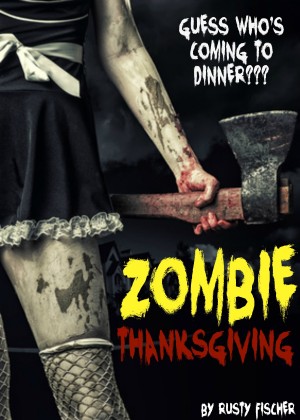 Zombie Thanksgiving: A YA Short Story

Rusty Fischer is a full-time freelance writer, multi-published ghostwriter and the author of dozens of published books across a variety of genres, from nonfiction to fiction, including his popular A Living Dead Love Story series from Medallion Press. Visit him at www.rustyfischer.com to read more!

Zombie Thanksgiving is a short but enjoyable story about Cassie, a student at Parnassus Preparatory Academy for Troubled Adolescents, who has stayed behind in the dorms over Thanksgiving break. It’s set sometime in the future (post-2018), after several zombie outbreaks, and after the discovery of The Cure that allows zombies to regain semi-normal function in society. I’m not well-versed on the zombie genre, but it’s a twist that I haven’t encountered before. Zombies who have had The Cure can speak, hold jobs, and retain memories of their lives before — but they still eat brains. There’s a disgusting scene that I had to skim over…

I have a bias against short stories because I never feel like they give me enough, and that’s true with Zombie Thanksgiving. I want to know what happens to Cassie and Reggie, and I also want to read more about Cassie’s life both before and after meeting him. I have so many questions! Why is Cassie at Paranoia Prep? Why didn’t she go home for Thanksgiving? Will Cassie and Reggie form a relationship or remain friends? Could they even have a romantice relationship? And what about Reggie? How did he become a zombie? What was he like before?

You have subscribed to alerts for Rusty Fischer.

You have been added to Rusty Fischer's favorite list.

You can also sign-up to receive email notifications whenever Rusty Fischer releases a new book.