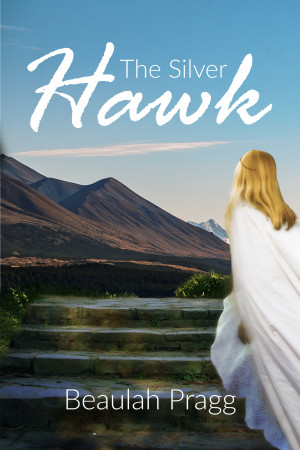 By Beaulah Pragg
Rated 5.00/5 based on 9 reviews
Magic is a gift from the Goddess, meant only for her daughters - or so the Order teaches. More
Tynan shouldn't have this power, and when the priestesses find out, they come for him.

His twin sister, Tasya, is a spy in the palace serving as handmaid to the Royal Heir. To keep her vow to save her brother, she'll have to walk a fine line between love and betrayal.

Meanwhile, Maat and Mikael watch from their orbital space station, forbidden to interfere in what should be a routine experiment. But when they learn their population have been scheduled for termination, they realize just how much they've come to care for their crazy mortal family.

Beaulah works for Christchurch City Libraries, as well as teaching creative writing and independent publishing. She is a founding member of the Christchurch Writers’ Guild, a free and accessible space for new writers to find encouragement and support. Her novel, The Silver Hawk, is the first in a science fiction / fantasy trilogy for young adults.

Review
inkedphoenix reviewed on May 6, 2011

I adore this book, and I am (quite frankly) a literature snob. If I don't like something, I just won't read it. This book? I LITERALLY had to hide my kindle so I would go to sleep. I woke up early just to continue on....and now I'm salivating for the sequel! READ IT you won't regret it! Don't wait until all the hipster kids are reading it because it's so cool, lead the cool kid pack!

I found this book rather delightful. It isn't literary brilliance that will be studied by academics for years to come, but it doesn't try to be. It is, however, a thoroughly engaging piece of fiction that will appeal to young adults and not-so-young adults alike. It is brimming with ideas, passionate, adventurous, and inspiring.

I know it's a cliché to say that you can't put it down, but with this book it is true - I read it in two sessions, because I just didn't want to stop.

(Conflict of interest - I know the author personally.)

A refreshingly original story with a great set of characters.

The Silver Hawk uses a rich blend of SciFi and Fantasy to reflect with perception and humour on the basis of our own cultural and social views.

I look forward to the other volumes in this trilogy to see where the author will go with this.

Great read, love the way scince fiction and fantasy comes together so well ... can't wait to read more from this author.

Having had the privilege of reading the first 'final draft' of this story, I was already impressed... and it doesn't take much to see that the current plot is radically different from the one I first encountered, yet still quite amazing. For dedicated sci-fi and fantasy readers, the tell-tale signs of a novice author are indeed there, but once you accept that and let go of it, the story draws you in easily and keeps you willingly there.

The plot was an ambitious one, broad in scope and dual in nature... not only do you have the long-range troubles of the Narian twins in orbit - one who has become emotionally attached to the short-lived humans they are monitoring, and the other who has indulged himself in unauthorised genetic experiments - but you also have the myriad dramas, intrigues and emotional interplays between the human population on the planet's surface. All are told in an interleaved, roughly time-synchronous 3rd person narrative style that enables the reader to stand back and observe from 'outside' while still enabling an emotional connection to the characters themselves.

Though some of the characters start out thin and flimsy, they reveal the details of their lives, and thus their relevance to the story, in a gradual fashion that leaves them always somewhat of a tantalising mystery yet never too weak to support their part. This is pretty good technique for a novice author, and I applaud Ms. Pragg for achieving this so smoothly.

Overall, a fun tale, and a good first story in the trilogy to be.

Offers up lots of social drama with a selection of very believable and likable characters. A beautifully refreshing take on Gods and the role they play, that nicely merges Sci-fi and high fantasy. The way everything comes together at the end is very satisfying and leaves you eager for the sequel.

If you're after a read that deals with a lot of interpersonal drama thats believable, entertaining and full of great plot twists I would heartily recommend this.

I thoroughly enjoyed reading this book.

Beaulah has cleverly woven together the psychology of how human beings interact with one another, principles of good ethical research practice, philosophical questions about the meaning of life and what role gods play in an exciting and new way. I was captivated!

Beaulah has created a fascinating world in which the characters live out their lives, while two rather amusing 'god-like' immortal scientists watch on with intrigue.

I really enjoyed how the book invited the reader to take a step back and ponder what it might be like to watch human life from above. In essence, I found this book to be a delightful read, witty, fun and best of all thought-provoking.

I was impressed from the very moment I read the synopsis for this book.
The idea itself is so fresh and innovative it is unlike anything I’ve ever read before. It’s a truly interesting, compelling storyline and Beaulah Pragg has developed it brilliantly.

The Characters leap of the page. They are complex and individual and, most importantly, human; Even when they’re alien.

As an author (unpublished) myself, I have struggled before with the passing of time in my work. In this book the concept of the different character’s perspectives of time is utilised in a slick and functional way. The story leaps and jumps through time but manages to do it smoothly. You never leave the story; it’s constantly pulling you forward which creates a book that is very difficult to stop reading.

While some of the language and formatting used does give away the ‘new author, first book’ idea it doesn’t distract from the plot.

“Always leave them wanting more.” This book has charmed me. I need to know what happens to Mikael, Maat and the humans. Can’t wait for the sequel.

When I was told to read this book, I have to admit I was a little sceptical. The first novel of a new author. However, later that night and over 100 pages later my scepticism was gone.

This book, while clearly written as a young adult text in terms of language and theme, provides an enchanting intertwining of science fiction and fantasy concepts. It deals with issues such as the nature of self, loyalty, immortality, family, friendship, and the wider issues of ethics.

The characters are believable and well developed. In particular I was impressed with the realism of the characters emotions and thoughts. Characters that don't have to take themselves seriously, characters whose emotions are based not just on themselves but the culture and community in which they live.

The plot lines are interesting, suspense is generated and used to maximum effect with some rather nice plot twists. [[Spoiler Alert] In the text, the author plays with the concept of time, using different characters perception of time to move the plot forward. I found this technique a refreshingly original take on plot development.]

My main criticism of the text is that the setting of the story sometimes takes second place to character interaction when it doesn't have to. As the novel progresses the authors techniques in this area are improved, but it still needs a little work.

Having said all of the above, I thoroughly recommend this book. I loved the merging of the science fiction and high fantasy themes. I'm looking forward to the sequel!

[Conflict of Interest: I know the author.]

You have subscribed to alerts for Beaulah Pragg.

You have been added to Beaulah Pragg's favorite list.

You can also sign-up to receive email notifications whenever Beaulah Pragg releases a new book.