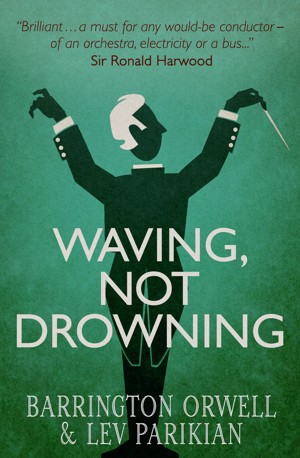 By Lev Parikian
Rated 5.00/5 based on 1 review
Waving, Not Drowning is a mercifully short book comprising the last and definitive thoughts of the great and under-appreciated Maestro Barrington Orwell, as told to his colleague and friend Lev Parikian. Part biography, part orchestral conducting manual, Waving Not Drowning acts as a compendium for the aspiring conductor as well as startling insight into life on the podium. More
Anyone who has ever wondered exactly what a conductor is doing will find the answers in this book. Covering a multitude of issues including technique, player psychology, shirt colours, anecdotes, pencil choices and much more besides, Waving, Not Drowning is the indispensable guide for all budding Maestros.

With the tragic death of co-author and doyen of the podium Barrington Orwell in an as yet unexplained contrabassoon accident, it was left to his colleague and friend Lev Parikian to complete the story on his behalf.

The result is part biography, part coaching manual, all wisdom.

From the profound insights of his professor, the incomparable Etwas Ruhiger, to his views on spectacles management, Orwell’s thoughts, collected in this mercifully short book, will keep you enthralled from Auftakt to ovation.

Lev Parikian is a writer and conductor from London, England.
He spends a lot of time standing in front of people waving his arms in the hope that sounds will materialise.
He also spends a lot of time staring at a computer screen in the hope that words will materialise.
He lives in London with his [redacted], [redacted], and three domesticated (and, rest assured, entirely neutralised) [redacted].
He has never been to Uzbekistan.
His first book, Waving, Not Drowning, a searing exposé of the craft of the orchestral conductor, was published in 2013. His second book, Why Do Birds Suddenly Disappear?, a tale of atrocious birdwatching, will be published by Unbound in 2018.

Reviews of Waving, Not Drowning by Lev Parikian

You have subscribed to alerts for Lev Parikian.

You have been added to Lev Parikian's favorite list.

You can also sign-up to receive email notifications whenever Lev Parikian releases a new book.