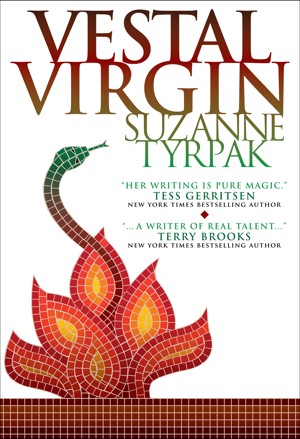 Rated 4.44/5 based on 9 reviews
Elissa Rubria is a Vestal Virgin--priestess of the sacred flame, a visionary, and one of the most powerful women in Rome. Vestals are sacrosanct, sworn to chastity on penalty of death, but the emperor, Nero, pursues Elissa, engaging her in a deadly game of wits and sexuality. Or is Elissa really the pursuer?
Terry Brooks: “...a writer of real talent.”
Tess Gerritsen: “Pure magic.”
Available ebook formats: epub mobi pdf rtf lrf pdb txt html
First 25% Sample: epub mobi (Kindle) lrf more Online Reader
pdb
Price: $3.99 USD
Buy Add to Library Give as a Gift
How gifting works
Create Widget
Tags: suspense historical rome suzanne tyrpak vestal virgin saylor
About Suzanne Tyrpak

Zané Sachs has worked for several large corporations (including a supermarket), and those situations have, in part, inspired Sadie the Sadist. Sadly, she has found, that the current work environment in the U.S. often treats workers as expendable units, comparable to robots. Every day automated systems and machines are replacing human workers. Zané expects to be replaced by a robot any minute. She is currently working on a prequel to Sadie the Sadist, titled Sadie's Guide to Catching Killers, and a psychological suspense novel, Jayne Just Watches.

Elissa is the noted Vestal Virgin and is loved by Gallus Justinies. Upon finding her brother, Marcus, has been murdered by Nero, Elissa sets her feet up the path of destiny. Can she keep out of Nero's clutches? This was not a bad novel and a decent way to spend an afternoon in the sun.

I liked it. Its a time period I love, the society that I'm about obsessed with and a few new characters to read about and possibly write a paper for school. The author did a good job drawing the reader in from the beginning with the clever assassination of Marcus and keeps you going with the plot twists and debauchery of the Roman court. I recommend a bit more editing for a tidy up (especially with the Latin and it's declensions) but otherwise it was a great read. I recommend for anyone who enjoys historical fiction and thrillers.

This is a captivating story of a vestal virgin and the two men who either desire her or want to possess her. It is engrossing because while reading it you seem to be a part of the story with all the smells, sounds, and sights of that time period. Which is why it is hard to put down once you begin reading it - you get hooked on the characters and what will happen to them next.

Christianity plays a large role in the book, and some characters of the bible come to life as the events that take place long ago are interwoven in the story. But as wholesome as that sounds, this book has graphic sexual situations and images of corruption, drug abuse, and scandal throughout that ring true to the times. People follow whoever has supreme power in the book, no matter how distasteful and shocking their actions are. The characters historically are correct, and Roman mythology is talked about.

I have just finished reading Vestal Virgin and my feelings are mixed. The writing and pacing of the story are good--often compelling. However, I'm not convinced by the characters.

At the beginning of the book we are introduced to the vestal virgin, Elissa. Right away we discover that the emperor Nero has sentenced her brother, Marcus, to death for treason. The charges are false yet her brother dies anyway. The death of Marcus shapes the rest of the book: Elissa seeks revenge whilst Nero taunts her.

It is difficult to empathise with Elissa since Marcus' death occurs very early, before the reader has had a chance to bond with any of the characters. Of Marcus himself, the reader learns very little. The book would have benefited greatly from a chapter or two developing the characters, before the action starts. As things stand, one is very detached when reading the important first chapter.

Nero's evil is supposed to fuel Elissa's thirst for revenge and so is very important to the story. The difficulty is that Nero is a pantomime villain. He is evil because we're told he is: the reader repeatedly hears of how he murdered family members to ascend to the throne. This rings hollow since such behaviour was common both before and after this time in history (e.g. the Ptolemies and the Ottoman emperors). Nero's actions in the book are designed to either make him look evil or ridiculous. The character has no positive attributes and his main motivation seems to be causing grief in others. All of this makes Nero one-dimensional and unconvincing.

The lack of empathy one feels for Elissa's plight and the cardboard cut-out villain don't do justice to the writing, which is often rather good.

Finally, there is the issue of religion. Quite a strong Christian theme runs through the book and those who are not religious may find it a little annoying. Ellisa in particular is ready to give up her existing beliefs and follow Jesus. This semi-conversion is not presented convincingly. It is likely that Romans would have been wary of Christianity as Nero was notorious for persecuting Christians, something not discussed in the book.

I started this book and could not put it down. The writing was great and gripped you from the very beginning. The story was obviously very well researched. I would highly recommend this book to anyone.

Other reviews tell you the storyline of this fine novel set in Rome during the time of Nero so I will concentrate on the writing.

Suzanne Tyrpak has shown herself to be a first tier writer. She has woven a tale of life and tribulations of a historically accurate Vestal Virgin. I was unaware that they even existed. Suzanne has crafted a wonderfully articulate story of fictional characters interwoven amongst historical figures.

Characters are introduced cleanly giving the reader the ability to immerse themselves in the story. There are a fair number of characters that are interwoven yet there is no confusion regarding their purpose. Throughout the book, I felt that I was the proverbial fly on the wall. I felt that I could actually visualize the story rather than just reading words on a page.

The writing style is engrossing – you are drawn in and kept entranced. If I had a physical book I am sure that I would have been unable to put it down. I read the first half on my iPhone which is not the best medium. I finished using a Kindle reader app which allowed me to read more in one sitting.

I believe Ms. Tyrpak has established herself as an author capable of competing with the mainstream published authors. I am waiting with great anticipation for her next novel that I understand may be out by years end.

Its a look at Rome in the time of Nero. With some real figures and places woven into a story with fiction characters of what the lives where like.
Elissa Rubria Honoria is a vestal virgin and bound to serve as a virgin for 30 years. She cares for her family and tries to save her brother than her sister from Nero.
Gallus Justinus loves Elissa and has been in the senate and following Paul teachings of Jesus.
Tells a lot of sex and drugs and things Nero and his court are up to. How he can turn from friends and put them to death in the circus.
Nero once lover Marcus (Elissa brother)he thinks he want to kill him. Than wants Elissa as a lover and she denies him and then wants her little sister.
friends are spys on each other. Its is an engaging book. I did not want to put it down.

Taken from her home when still a child, Elissa is a revered Vestal Virgin. Somewhat sequestered from the rest of Roman society, educated and powerful in ways that are different from other women of the time, Elissa struggles between doing what is expected of her and dealing with her strong emotions of longing towards one man and hatred towards another. When her brother and sister become part of the drama that surrounds Elissa, she must fight with every bit of her being in order to survive the perilous future laid out before her.

With a fluid writing style, Suzanne Tyrpak has created a gripping tale that immerses you in another time and culture. From the very beginning, I was pulled into the storyline. The plot is well-paced, with excellent timing on the introduction of characters and situations. Initially, more time is spent getting to know the various characters, and the pace picks up in sync with the increasing tension. Throughout the story, we follow the characters as their lives become inextricably intertwined. Each character plays a very important part in the overall story, and they are very well-developed and interesting in their own right. Although the storyline focuses upon Elissa as she struggles to put her world right, the supporting characters are no minor parts. On the contrary, they are just as engaging and complex as Elissa herself.

The ending was artfully written, providing both closure and peace. My only real quibble is that I felt the story of Flavia was unfinished. As the story of Elissa was more complete and offered more closure, the ending for Flavia seemed incomplete by comparison and I felt as though there was a bothersome, dangling thread. Although not the main character, Flavia played such an important role that the incompleteness of her tale left me wanting more. Although they were several scenes involving "deviant sex," as the official blurb calls it, they were so skillfully integrated and told suggestively rather than with explicit detail, and they added to the overall story. This tale was truly about Elissa's journey to save herself and her family and to carve out a bit of happiness along the way, and everything in this story supported that theme.

Altogether, a beautifully written story from a very talented author!

Intense, gripping, powerful are just a few of the words I would use to describe this book. The reader is drawn into an emotional whirlwind of intrigue, suspense and anguish. Once I started this book, I was unable to put it down. The author does an excellent job of drawing the reader in and bringing the characters to life. Highly recommend!

You have subscribed to alerts for Suzanne Tyrpak.

You have been added to Suzanne Tyrpak's favorite list.

You can also sign-up to receive email notifications whenever Suzanne Tyrpak releases a new book.