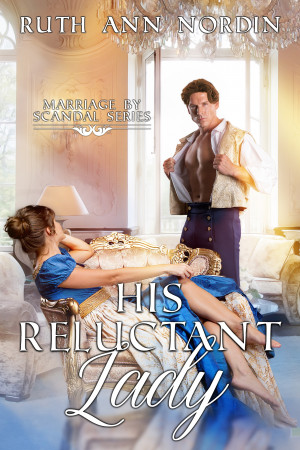 By Ruth Ann Nordin
Rated 5.00/5 based on 2 reviews
Mister Christopher Robinson will do whatever it takes to secure a marriage to Agatha Lyons, the very beautiful but elusive Lady of Richfield. When he discovers her secret, he offers her a deal: marry him or risk scandal. More
Will she choose marriage to avoid a scandal?

From the moment Mister Christopher Robinson meets Lady Richfield at a ball, he wants to marry her. But Agatha Lyons has no desire to enslave herself to another cruel husband. She’s very happy as a widow and is determined to stay that way. Unfortunately, she is hiding a secret, a secret so shocking that if it was discovered, it could ruin her reputation.

When a little slip exposes this secret, Mister Robinson sees his chance and makes her a deal: marry him or risk scandal. Will she keep her independence as a wealthy widow or will she succumb to a second husband who not only threatens to ignite her dormant passions but makes her want to give up her heart as well?
Available ebook formats: epub mobi lrf pdb
First 20% Sample: epub mobi (Kindle) lrf more
pdb
Price: $2.99 USD
Buy Add to Library Give as a Gift
How gifting works
Create Widget
Tags: marriage humor sex historical romance gossip regency scandal bride rumor virgin hero
About Ruth Ann Nordin

Reviews of His Reluctant Lady by Ruth Ann Nordin

Very nice!Can't wait the next!

His Reluctant Lady By Ruth Ann Nordin
Regency Collection Book 4
Christopher Robinson has decided that Lady Richfield is his other half and he will stop at nothing less than marrying her. Even if he needs to use a scandal to get her to agree. And when such a scandal happens to make itself known to him….he picks it up and runs toward the altar with it.

Agatha Lyons, Lady of Richfield is all looking good for the Ton and polite society. She hated her one day of marriage and loves her freedom. No one will ever know that she may now and then dress as a man or have a few alias names such as Gerard Addison and Gilbert Horlock. And what is it about Mister Robinson that sends tingles up and down her spine?

I love the way this book brings back some favorite characters from the previous books such as the Roderick's from The Earl's Inconvenient Wife, where we first meet Christopher. Lord Edon and Lady Catherine from A Most Unsuitable Earl. And as always Christopher’s guardian, Perry Ambrose, Earl of Clement. Once again Perry didn’t get the girl, his story is yet to come in The Earl’s Scandalous Wife.
**Sexual content within marriage
http://justjudysjumbles.blogspot.com/2011/09/ruth-ann-nordin.html