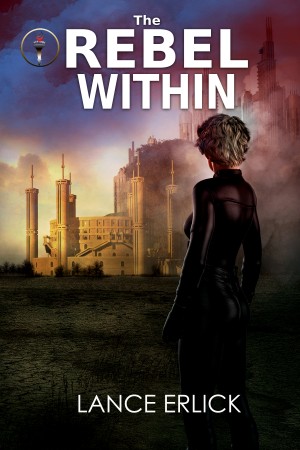 By Lance Erlick
Rated 5.00/5 based on 2 reviews
Annabelle Scott lives under the iron rule of a régime that forces males to fight to the death to train the military elite. When pressed into service as a mechanized warrior to capture escaped boys, Annabelle tries to stay true to herself by helping some escape. Her defiance endangers everyone she loves and thrusts her to a place of impossible life and death decisions. More
“Readers will easily engage with this well-written tale. Annabelle is believably stubborn, yet also vulnerable and likable … plenty of action and suspense … A stimulating, worthwhile story of a dystopian future.” – Kirkus Reviews

“If you like action, suspense, and vivid characters, look no further.” – Serena Wadhwa (Windy City Reviews)

Annabelle Scott tries to keep her rebellious thoughts to herself, avoid the draft, and protect her younger sister. The Federal Union forces her to be a police intern. She gets into trouble and is offered an impossible choice.

Perfect for fans of the Hunger Games, Divergent, and Maze Runner. The Rebel Within is the first book in a science fiction thriller series in which a young woman is drafted into the police and then into the elite military to enforce laws she believes are wrong.

A second American Civil War ended in a shaky stalemate dividing the country into the “civilized” Federal Union and the warlord-controlled mountainous Outland. Annabelle lost her biological parents to the conflict when she was little and was adopted by a member of the Union’s political opposition. The loss of her parents and her adoptive mother’s opposition lead Annabelle to be rebellious in a society that promotes conformity and punishes disobedience.

Annabelle has never met a boy. The only time she sees them is at a prison across from her school while she’s in detention or when she escapes to the roof. A redhead has caught her attention, but boys are forbidden.

When the redheaded Morgan escapes prison, Annabelle feels compelled to help him and almost gets caught. Frustrated, she fights an amazon bully to protect her sister and is arrested. To avoid prison, which would take her from her family, Annabelle joins the dreaded Mechanized Warriors, tasked with capturing escaped boys.

Reviews of The Rebel Within by Lance Erlick

It took me a bit to get into the story, but I really enjoyed it and was glad I read it. I am amazed at how well the author got into the mind of a 16 year-old girl.

(reviewed 3 days after purchase)
The Eclectic Bookworm reviewed on Aug. 18, 2013

Ahhh…another one of my favorite type of books. A mash-up. Part dystopian, part romance, part thriller, part scifi and part YA. I absolutely loved this series.

My daughter is named Annabelle (but it is spelled differently), so it was a little disconcerting to read “Annabelle” so often and not think of my munchkin.

But other than the adoption thing and living in a female dominated society, my child has a lot in common with her fictional counterpart. Her rebellious nature for one, her looks for another.

Getting past that, I truly loved the character. She is strong, intelligent. She has a heart. She knows that her society isn’t the utopia it is portrayed to be. She has an unquenched thirst for justice and determination to match.
I loved learning about this “utopia”. I live in the South, and I occasionally run into the misinformed ideals of macho males who think I should be in my kitchen barefoot and pregnant. So reading about an all-female society was very interesting.

Reading about how this “utopia” came about was even more intruiging: in the early decades of the 21st century, right-wing extremists tried to turn back the clock. When they failed, the seceded, bringing the Second American Civil War.

Well, that seems plausible. Especially from my seat down here in Texas. A state that regulates a woman’s body to “protect life” but promotes gun ownership and kills 300 people per year by lethal injection.

But as good as “the Union” seems, all “utopia” type societies always have a nasty underbelly. This one treats males as third class citizens. Any males that they do encounter are jailed (including children that are sent to “schools” that are fenced in like a prison) and are forced to wear a shock collar.

Annabelle starts helping boys escape. And then a turn of events forces her into the military.

The gadgets and tactics used for training were fascinating. I loved the idea of the simulators. However, like “The Hunger Games” by Suzanne Collins, reading about the training and about young teenage girls nearly killing each other was disturbing.

Even more “Hunger Games”-esque was the final test for those intending to serve in the mech forces: a fight to the death in an arena against a male who is hopped up on steroids. It is televised, along with a tournament among the mech recruit classes, and gambling is permitted on the participants.

I admire Annabelle’s hard work and grit in doing what she feels is right for her family, despite being totally against the organization she is training for.
I loved reading about her relationship with her adopted sister and mother. The urge for Annabelle to protect Janine is palpable.

I was also sent the second book, Rebels Divided, by the author and jumped right in. Look for the review for that book tomorrow.

Overall, this is a wonderful book with strong characters, strong statements on politics and life in the United States, with twists of love, empathy and compassion.

You have subscribed to alerts for Lance Erlick.