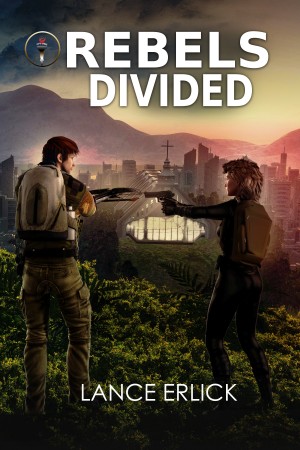 By Lance Erlick
Rated 5.00/5 based on 2 reviews
The first time Geo sees Annabelle, they meet as enemies and she doesn't kill him, which mystifies them both. Hunted by military on both sides, can they overcome mutual distrust and work together to rescue her sister and gain justice for the murder of his father? More
“An action-packed love story with even more twists and turns than its prequel … Followers of the series will be more than happy to find Annabelle Scott just as feisty and zealous as she was when last they saw her.” – Kirkus Reviews

“Annabelle. She fits right up there with Katniss and Tris, but Erlick takes her a bit further than Collins took Katniss and Roth took Tris.” – Terri LeBlanc

Perfect for fans of the Hunger Games, Divergent, and Maze Runner. Rebels Divided is the third book in a science fiction thriller series. It takes place after a Second American Civil War leaves the nation divided into the civilized Federal Union and the warlord-controlled Outland. It takes place three years after The Rebel Trap.

Geo is a rugged frontiersman who hungers to bust loose from the impoverished Outland glen where his rebel father hides him from the local warlord’s Rangers and the Federal Union’s Mechanized Warriors. The Federal Union took Annabelle’s biological parents when she was little and she was adopted by a member of the Union’s political opposition. Though drafted into the elite Mechs to hunt rebels and escaped boys, she has helped several to escape.

The Outland warlord and the Federal governor conclude a secret deal, pledging Annabelle to the warlord to provide heirs, and putting a bounty on Geo and his father. When Annabelle refuses, her people betray her to the warlord who kidnaps her and her beloved sister. Geo’s plans to break loose of his father’s control lead to the father’s death and Geo hunted as a rebel leader’s only son. Unable to locate her sister, Annabelle escapes the warlord, but is surrounded by his Rangers. Hunted by the warlord and with no help from the Mech Warriors, Annabelle connects with Geo as a last resort, but they are sworn enemies.

I thought this was even better than The Rebel Within. It moved fast and was quite engaging.

(reviewed 3 days after purchase)
The Eclectic Bookworm reviewed on Aug. 18, 2013

I loved this book as much as the first, despite some issues I had with the ending.

This book takes place three years after the end of the first book. Annabelle is a mech, an elite female warrior who is charged with protecting the border, rounding up boys and enforcing regulations.

This book also lends more insight into the “Second American Civil War”. As with the first book, this absolutely fascinates me. “When the Progressive Reunion seized power, men got suckered into supporting the Patriots; they saw no alternative. After war broke out, they learned that entrepreneur Adrianne Picard secretly provided the Progressive Reunion with mech gear and drones. The war ended quickly. Radical Patriots clung to Appalachia and limited government”.

The way this is conveyed throughout the book is in a simple manner that is plausible in light of today’s political issues. I live in the great state of Texas, which would probably be at the forefront of any “Patriot” party movement.
In this book, Mr. Erlick further examines the problems that usually plague any sort of “utopian” society. In the Progressive Reunion stronghold, known as the Federal Union, Annabelle learns that the rules don’t apply to all. She sees things in her capacity as a soldier that further questions the confines of her society “we’re all equal, except the elite. She tried to remember where she had read that. Some banned book her mom kept hidden? Animal Farm maybe.”

Also in her capacity as a mech, Annabelle can help the unfortunate boys that are discovered living within the borders of the Federal Union. She becomes part of the Underground Railroad that leads boys and men to safety in the Outland. In this activity, she regularly meets with her adoptive mother’s banished husband. And in a fateful turn of events, meets Geo, her adoptive brother that she has never met.

They both have to collaborate to survive as well as bring peace to their prospective homes.

Again, I love the character of Annabelle for many reasons. Her humanity and her compassion only deepen in this book. She also pieces together many parts of a complex puzzle and is able to avert disaster.

I also fell in love with the character of Geo. He is strong, loyal, very intelligent and also works for what is right. I loved reading about his conflicting feelings for Annabelle.

I also loved reading about the gadgets and techniques Geo and his father came up with while living in the Outland. They have electricity. They have saferooms. They have homemade weapons and other ways to ensure their safety (for the most part).

The problem I have with the ending is that it essentially abruptly ends. Also too many loose ends are tied up at once in a nice pretty package. As much as I love happy endings, things just seemed a little too convenient by the end.
I would have liked an epilogue that sketches out Annabelle’s new life or a hint that everything is alright beyond the last pages of the book.

But overall, a very satisfying conclusion to the adventure Annabelle began in the first book.

You have subscribed to alerts for Lance Erlick.