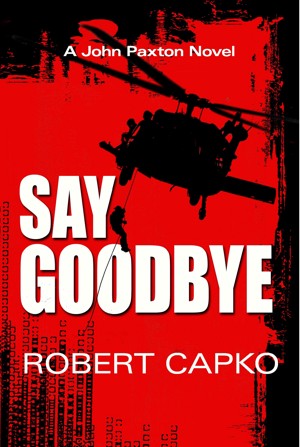 By Robert Capko
Rated 4.73/5 based on 11 reviews
Air Force pararescueman John Paxton is commanded to lead a team on a dangerous mission—supposedly to rescue the pilot of a stealth fighter. Yet, nothing is as it seems. As the mission goes from bad to worse, Paxton uncovers a deadly plot that threatens National Security. But to fight this enemy, he must also risk the lives of the people he loves the most More
America is ready for a new type of hero. John Paxton is a man who understands duty—both to his family and to his country. As a highly decorated pararescueman in the Air Force, he's risked his own life numerous times to save the lives of others. He is the epitome of the pararescue motto: These Things We Do That Others May Live. But now that he's married with two small children, he's content as an instructor at Lackland Air Force Base.

Then Paxton is commanded to lead a team on a dangerous mission—supposedly to rescue the pilot of a stealth fighter shot down over Serbia. Yet, nothing is as it seems. As the mission goes from bad to worse, Paxton uncovers a deadly plot that threatens National Security. But to fight an enemy with ties to one of the most dangerous organizations on the planet, he risks not only his own life, but also the lives of the people he loves the most.

Award-winning author Robert Capko writes action/adventure thrillers. He is a veteran of the United States Air Force and lives in Central Florida where he is enjoying the weather and working on his next thriller, THE LONG ROAD HOME that will soon be available from Class VI Publishing.

Military men are a breed of their own. Honorable to a fault for when Senior Master Sergeant John Paxton was given an order he obeyed even when he didn't fully understand the mission.
John Paxton was a Pararescue Jumper and now a Pararescue Jumper Instructor. His adventure began and his life could change forever the moment General Reed and Colonel Ward walked into his office. Given absolutely no time to call family or let his wife and children know he was leaving, John was ordered to go on a somewhat sketchy rescue mission in Yugoslovia.
Everything about this mission was questionable including the man he was to be traveling with, McMurphy. The basis of the mission is to fly into Yugoslovia find and rescue the Stealth Fighter pilot. Oh and don't ask too many questions because he certainly won't get many answers. Everything started going awry and becoming more and more questionable from the moment he accepted the mission.
It is one mishap and adventure after another. Every turn leads to another suspense. Jump in and hold on for a crazy ride.
**Robert did an excellent job with character development. The story line was well thought of but at times I did have to flip back and forth to stay with parts of the story. There were several situations going on at the same time in different parts of the world.
All in all the book was very interesting and it is not my typical genre that I read. I also do not have an understanding of many things military but was able to follow what was going on.
It is suspense and leaves the reader wanting more!!!!

(reviewed the day of purchase)
Patrick Dougherty reviewed on June 28, 2012

I thoroughly enjoyed the book. Looking forward to Mr. Capko releasing his next novel. I highly suggest this book for any veteran to read, but anybody that enjoys action will like this book.

Say Goodbye by Robert Capko is a novel that starts with the word, “Crazy!” and that is what I thought I was for reading it. Only because it is not the usual storyline that I would choose. Since I usually don’t read military-type stories, I appreciated that Mr. Capko educated me along the way. He wouldn’t put acronyms in as if everyone understood what they meant, he would instead efficiently explain them. Not far into the story I was hooked. Hooked by the twists and turns that kept me wanting to know more about how the main character, John Paxton, was going to overcome every obstacle thrown in his path. Hooked by the genuine dilemma he was placed in, love of country versus love of family. The importance of saying, “Goodbye,” to those you love as an underlying turmoil had a personal connection for me. Capko’s use of life’s humor, vivid descriptions and images (“He had salt and pepper hair, cut in the style of a Marine, and piercing blue eyes.”) made Say Goodbye believable, relatable and enjoyable. I caught myself thinking about the characters and their situations, even when I wasn’t reading. Because the further I read the harder it was to put down, I have recommended Say Goodbye to friends and family. Even once I completed Say Goodbye, I felt a connection to the characters and the John Paxton story. Congratulations Mr. Capko on a story well told. I look forward to your character Paxton’s next adventures in, The Long Road Home.

I have to keep this review short, because if I go into too much detail, I might throw in a spoiler and inadvertently ruin this fantastic read for the many, many readers I know it currently has and will continue to have.

There is nothing formulaic, repetitious or trite in the first of what I hope Mr. Capko makes into a long-standing serial. I have seldom been enthralled by a military thriller as much as "Say Goodbye" managed to do from page one. There are so many questions the reader has to answer about why John Paxton (a Pararescue Jumper who plays with the idea of retirement while he teaches other servicemen in his field) is called to join a very sketchy secondary character, McMurphy, in a mission that can only be described by a brilliant new word the novel taught me which I can't post here, so I'll paraphrase: hot mess. The original word can pretty much surmise the mounting stress, foreboding, mystery and sheer thrilling entertainment that makes up the plot of "Say Goodbye".

I have always admired authors who either rely on their own expertise or research the intricacies of military equipment, strategies and history, but very few of them are able to break away from the description of a gun or an aircraft and also draw characters that are well-rounded, engaging and most of all, relatable. Mr. Capko is that rare talent who can sum up a clear depiction of a service man caught up in the pre-9/11 ethnic cleanse and brutal massacres in Yugoslavia and still wrestle with the anxiety of leaving on what might be a suicide mission without speaking to his wife and children. This is a book for a wide audience, and every page turn is rich with images and action that can easily translate into a blockbuster movie. Hollywood, give this man a producer and a director, and let him write his own script. This book is movie-ready from page one.

Robert Capko is simply a brilliant storyteller, and I can only wish him many followers and a long and truly successful writing career. He deserves it; this book is thrilling and fantastic; this is a must-read!

Say Goodbye was an excellent military suspense/thriller that keeps you hooked throughout the story. The storyline is well put together and leaves you wanting more. This is must have for fans of Military style writing.

(reviewed 5 months after purchase)
Maggie Benko reviewed on May 6, 2011

An intriguing military thriller with spiraling life and death action that will leave you wanting more! Paxton is a patriotic hero who risks his life for his country and fellow airmen without hesitation while being tortured by the thought of perhaps never seeing his wife and children again. There was a point where I had difficulty turning the page for fear of what tragedy or miracle was about to unfold. I am very much looking forward to the next in the series - THE LONG ROAD HOME. - Maggie Benko

What I found most enchanting about this action packed novel was Robert Capko's ability to intermingle the characteristics of a superhero with those of a devoted and loving husband. Throughout all of his adventures, Paxton still keeps his love for his wife at the forefront. I found Say Goodbye exceptional in its ability to mix the the heroic elements of adventure, risk, and sacrafice with the more domestic qualities of devotion, loyalty and faithfulness.- Paula Vickers

Finally a great military thriller that highlights the exceptional talents of the finest special operations operators, the U.S. Air Force Pararescuemen. The adrenaline was pumping with each page and the many twists and turns keep you speculating to the very end. Military and National Security drama enthusiasts have found a new hero in MSgt. John Paxton. From life and death at 50,000 feet to door busting close combat, from cloak and dagger mystery to raw human survival this book has something for everyone and you will not want to put it down. - CHON GANN – Medical, Security, and Intelligence Professional

Great fast paced book. Seemingly realistic and accurate due to the author's real-life US Air Force experience. I'd also recommend this to any fans of classic Tom Clancy. Looking forward to The Long Road Home!

You have subscribed to alerts for Robert Capko.

You have been added to Robert Capko's favorite list.

You can also sign-up to receive email notifications whenever Robert Capko releases a new book.