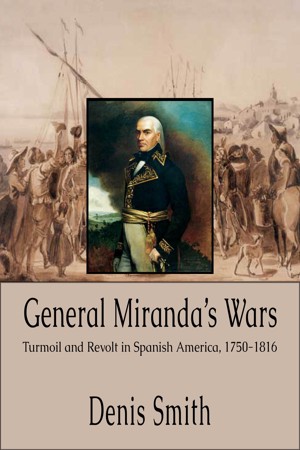 By Denis Smith
Before Simon Bolivar, there was Francisco de Miranda who plotted to free Spain’s colonies in South America. Roaming the world, he cajoled funds from the powerful, including Britain’s William Pitt and Russia’s Catherine the Great. But Miranda’s invasion of New Spain in 1806 was a painful fiasco. He died a prisoner in a Spanish dungeon and the way was now clear for Bolivar’s eventual triumph. More
Napoleon called him “a Quixote who was not mad... a man who has a sacred fire in his soul.” President John Adams said his plan to liberate Spanish America was “as visionary as an excursion to the moon in a cart drawn by geese.”
For 30 years the Venezuelan Francisco de Miranda plotted to free Spain’s colonies in the New World. Miranda lived a fabled life as an adventurer and mercenary soldier, supported by powerful patrons in England, France, the United States, and Russia. He was paid and protected by William Pitt of Britain and Catherine the Great of Russia, fought for France as a revolutionary general, was tried for treason in France, attempted to invade New Spain in 1806 with two hundred raw recruits, and for a few months in 1812 was the first dictator of an independent Venezuela. Betrayed by his deputy Simón Bolívar, Miranda was taken prisoner and died in a Spanish dungeon as Bolívar renewed his war for independence.
In this work of creative nonfiction, award-winning Canadian author Denis Smith tells a compelling story of intrigue and misadventure, posing questions about empire, diplomacy and the quest for freedom which continue to resonate today.
"I enjoyed General Miranda's Wars immensely. The perfect book for me at this moment. Of course I knew the British characters and their dilemma over Spain's colonies, particularly after 1808 when Spain became its major ally against Napoleon, but I had no idea of the extent of Miranda's attempted influence and manipulation over such a long time and all his other European adventures. He certainly was one of the great adventurers in an age of them and you tell the story very well. The light fictional device is brilliant in holding together the great number of documents from many sources and the inevitable gaps in them. Being so tied to the evidence, the device would never have occurred to me. I can't imagine that there could be a better evocation of Miranda."
--Dr. Neville Thompson, Author of "Canada and the End of the Imperial Dream" Oxford University Press
Available ebook formats: epub mobi pdf rtf lrf pdb txt html
First 10% Sample: epub mobi (Kindle) lrf more Online Reader
pdb
Price: $6.99 USD
Buy Add to Library Give as a Gift
How gifting works
Create Widget
Tags: south america revolution colonial history spain venezuela colonialism simon bolivar francisco de miranda spanish colony
About Denis Smith

You have subscribed to alerts for Denis Smith.

You have been added to Denis Smith's favorite list.

You can also sign-up to receive email notifications whenever Denis Smith releases a new book.