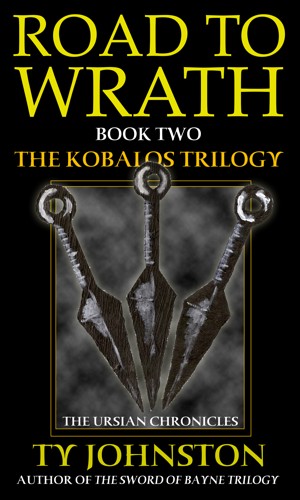 Road to Wrath (Book II of the Kobalos trilogy)

By Ty Johnston
Rated 4.00/5 based on 1 reviews
Book II of the Kobalos trilogy. The adventure continues. After fleeing the city of Bond, Kron Darkbow and companions travel across countryside, over mountains and into the evils of the Prison Lands. Their mission? To confront the infamous Lord Verkain, king of Kobalos. More
Kron Darkbow has fled the city of Bond, along with healer mage Randall Tendbones and professional duelist Adara Corvus. Everywhere they turn are enemies. With a price on their heads, old foes on their trail, and dangers waiting for them along the road and in every village, it seems nowhere is safe.

Even the goal of their travels offers no peace, for the group rides to the land of Kobalos where Randall must face that nation’s Lord Verkain, the alleged Dark King of the North.

But before Kron, Randall and Adara can make their way to Kobalos, there are demons to avoid, monsters to slay, assassins to defeat, and the country of East Ursia to pass, a land where Adara is wanted and wizards such as Randall are put to death.

Then there are the Prisonlands, Kron’s old stomping grounds, where the prisoners are now armed and free, and are taking their vengeance on all who cross their path.

OTHER BOOKS IN THE KOBALOS TRILOGY:

City of Rogues: Book I of The Kobalos Trilogy

Dark King of The North: Book III of The Kobalos Trilogy

Blade and Flame: Prequel to The Kobalos Trilogy (short story)

"Once again, Ty Johnston has written a winner. ... As always, the writing style of this author makes each of his books a joy to read." -- Lauralynn Elliott, author of THE GNOME

"My reaction to this book was similar to my reaction to City of Rogues. The story is irresistible. It drew me in completely. There was no question that I would keep reading ..." -- Brent Nichols, author of LORD OF FIRE

"Johnston is also known as a horror writer, and his talents there serve him well in some of the darker aspects of the story. The last third of the second book in particular, is quite chilling ..." -- Jesse Flohrs, Fantasy Faction

Originally from Kentucky, Ty Johnston is a former newspaper journalist. He lives in North Carolina with loving memories of his late wife.

Ty Johnston's Kobalos trilogy continues with book 2, The Road to Wrath. At the end of City of Rogues, revenge-obsessed Kron Darkbow transferred his rage from Belgad the Liar to a fantastically powerful wizard named Verkain. Now he's on the road to Verkain's kingdom of Kobalos, accompanied by Adara, master swordswoman, and Randall, Verkain's son who has become a healer.

The action never stops. Kron thinks he's done with Belgad for now, but Belgad isn't done with Kron. Along the road they'll meet savage mountain tribes, superstitious villagers out to murder Randall for using magic, and a tribe of cannibals who've escaped from prison.

Then there's Verkain. He has summoned indestructible war demons and sent them out to find Randall. If Kron and his companions can somehow survive this gauntlet of enemies, they'll have to face Verkain himself, a wizard of such mind-boggling power he could swat them all like insects.

My reaction to this book was similar to my reaction to City of Rogues. The story is irresistible. It drew me in completely. There was no question that I would keep reading, and I'll be reading the third book, Dark King of the North, as well.

The writing is flawed. Things are phrased in clumsy ways. And the number of typos is distressing. Yet the power of the storytelling trumps all of that. It's irresistibly entertaining.

The emphasis in these books is on action. The world-building is moderate at best, as is the characterization. Kron himself is almost ridiculously wooden at times. None of the characters are especially complex. Still, there are some interesting relationships and some tricky moral dilemmas that give the book some depth.

The wealth of action is one of the book's strong points, although it leads to one of my minor complaints. There is an appalling body count among the bystanders, in this book and in City of Rogues. Sometimes I almost wished the heroes would be killed, because they kept escaping at such a dreadful cost to the local population.

Overall this is an excellent adventure story with loads of action, and definitely recommended.

You have subscribed to alerts for Ty Johnston.

You have been added to Ty Johnston's favorite list.

You can also sign-up to receive email notifications whenever Ty Johnston releases a new book.