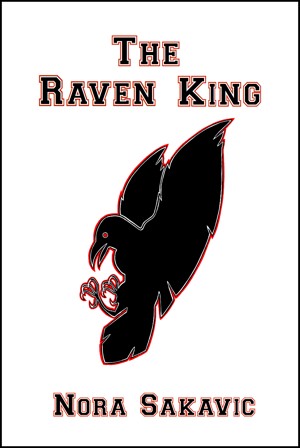 By Nora Sakavic
Rated 5.00/5 based on 7 reviews
Book 2; follows The Foxhole Court.

The Foxes are a fractured mess, but their latest disaster might be the miracle they've always needed to come together as a team. If Neil can get through Andrew's personal barriers, they might have a fighting chance this season, but Neil is running out of time. Riko is intent on destroying Neil's fragile new life, and the Foxes have just become collateral damage. More
Book 2 of All for the Game; The Raven King follows The Foxhole Court

The Foxes are a fractured mess, but their latest disaster might be the miracle they've always needed to come together as a team. The one person standing in their way is Andrew, and the only one who can break through his personal barriers is Neil.

Except Andrew doesn't give up anything for free and Neil is terrible at trusting anyone but himself. The two don't have much time to come to terms with their situation before outside forces start tearing them apart. Riko is intent on destroying Neil's fragile new life, and the Foxes have just become collateral damage.

Neil's days are numbered, but he's learning the hard way to go down fighting for what he believes in, and Neil believes in Andrew even if Andrew won't believe in himself.

You gotta work for your happy ending around here.

Having finished The Foxhole court, nothing else would do but satisfy my curiosity and immediately purchase The Raven King here on Smashswords. Having done so (and thanks for the pocket friendly pricing), i wasted no time ripping this middle book apart and i love it. The stakes feel so high i couldn't help but hold my breathe at times in anticipation. I actually did not understand what the hype was around Andrew. He was more towards the unlikeable side for me in the first book. However, i felt i got to know this complex character more in this book. I actually got to know all the characters better in this book. The storyline held steady and my boy Neil only grew more in my heart. Once again...five stars. Just bought The King's Man today after finishing this middle book. Im off to read it and give my review on the third book next. FIVE STARS

Five stars for all. Fantastic series, no words.

Back in high school I LOVED reading but fell out of it as college and work came along. The last series I read and fully loved was percy jackson series which I kept up with from time to time but grew dull of it.

This series on the other hand was something I was curious about. I happened to stumble upon the art on pintrest and grew curious about the characters. I eventually found the book and I was NOT let down.

This entire series took me a total of four days to consume and I ADORE it! Despite puchasing the pdf versions of this seires, I'm going to purchase the physical copies as well.

This is a beautifully written story about messed up characters dealing with their own troubled pasts while trying to bond as a team! Honestly, I adore this series so much and I probably will never be able to give it the proper credit it's due, but I will turn my friends on too it!

This is an excellent series so far. I just about inhaled the story, I read so fast. Totally engrossing.

Here's a cut and paste of the review I left on The Foxhole Court: I enjoyed these two novels (The Foxhole Court and The Raven King). The story was engrossing, but very dark emotionally, which is to be expected when the plot concerns mafia, death threats and mental illness. After finishing, it took me a while to rise out of the miasma of the main character's life. So as I said, very dark, but riveting.

I admit to skimming some of the sports bits. That said: the sports bits that I read were very well done. I've just never been that interested in sports. But the author has meshed the sports very well with the plot and character emotions/thoughts, so I doubt many readers will skim like me. I'm a chronic skimmer or speed reader. Some things just put me into speed mode. Sports is one, but gotta say, I slowed down for this book. This is an excellent first novel in a series and well written over all.

Mafia matters are very intertwined with the sports in this series. It works. It was very easy to suspend disbelief except every once in a while I wondered if Japanese mafia members were really that f---ed up and totally without a sense of humour. There's always some twisted SOB or two in a story with mafia.

I'm looking forward to book three and how the main character continues rising out of his emotional shut down while learning to have faith in some of the human race again.

As great as the first one, and I must add those are not the kind of books I usually enjoy.
The relationships are so powerful, the characters so interesting and twisted you can't help but be sweeped up in their stories. Seeing everybody evolve and grow and fight, Neil especially, was incredible. I bit my nails more than once during my reading.
I can't wait for the next book.

Yep. I loved this. Same great writing, same riveting plot, same fascinating characters. The Raven King unravels things a little further, and you get to see: more about the Foxes, more about the Ravens, and quite a little more about "Neil." You get to find more about every Fox's back story this time (except Allison, I think), which I really enjoyed. In particular, I loved the development of Neil's relationship with Wymack, Renee, Betsy, and, of course, of course: Andrew. This book has some very exciting moments in terms of plot, in which we really get to see Neil start to live life fully and unabashedly unafraid, but also happy. He starts to love again. It's bittersweet, considering his bleak future. His love story is so subtle, but so real, so, in it's own way, "sweet."

Anyway, a great read, just like the first book. I highly recommend checking it out.