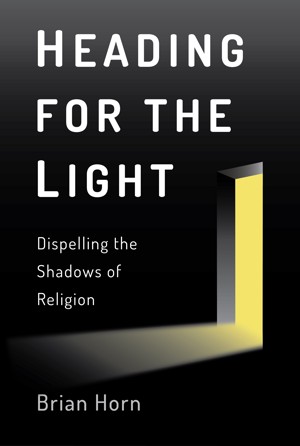 Heading for the Light: Dispelling the Shadows of Religion

Reviews of Heading for the Light: Dispelling the Shadows of Religion by Brian Horn

I learned of Brian Horn’s book from a friend, who happens to be his sister. She commended to me his commonsensical analysis of the vexatious propensity of our fellow creatures to be religious. I too commend him for that.

Heading for the Light is a quick read; took me maybe an hour and half, if that. It is a succinct, low key dissection of the contradictions of the Abrahamic religious texts and practices and the functional and dysfunctional effects of believing, with thoughtful discussions of how and why science and critical thinking offer more likely explanations of reality and better guides to action than creation myths and received dogma. Mr. Horn’s gentle approach avoids the rancorous, polemical orneriness of Hitchens and Dawkins and the mocking tone of Maher; for that reason it might be more convincing, or at least more palatable, if you are by chance looking for something to recommend to your religious friends who like to argue the subject. For me it was a refresher course in why not to believe in believing.

I’m long past caring much about a person’s religious belief or trying to convince someone to give it up entirely. But I do care how people behave, and belief definitely influences behavior. The persistence and cruelty of religious persecution and violence has never ceased to horrify and amaze me. Mr. Horn’s dispassionate but chilling chapter and verse citations of Biblical injunctions to kill all the neighbors and take their land, if you haven’t kept up on your Old Testament reading lately, will recall to you the very traditional roots of modern religious mayhem, possibly most especially with respect to the Israeli/Palestinian conflict. Not to mention slavery, murderous misogyny and homophobia. Really, with so many believers around, it’s a wonder things today aren’t worse than they are.

The author touches on the recent tendency of religiosity to infiltrate our own contemporary democratic institutions, from town councils and school boards to government bodies at the highest levels, which scares the daylights out of me. Reading this book might encourage reflection and moderation among some of the more thoughtful and sincere believers. But this is one of those books more likely to be read by the anti-amen chorus than by the folks actively in the choir who really need the sermon. Like the governors and US Senators the author mentions who proclaim, essentially, that they was brought up ignorant, are proud to still be ignorant to this day, and they gonna do their damnedest to “educate” their own and other people’s children to be every bit as ignorant as they are. Yikes!

Like the author’s, my upbringing was mildly and conventionally Protestant. At the age of 8 or 9, I experienced an anti-epiphany, still distinctly recalled as to the place and circumstances, and forever more was skeptical about revealed truths of all kinds. Since then, the ubiquity of religious belief has fascinated me. Alas, though Mr. Horn’s writing is insightful and lucid, he does not quite (and in fairness one must say he does not attempt to), answer my fundamental question about religion: How can people believe this stuff? I get why people want to believe; just can’t understand the how.

You have subscribed to alerts for Brian Horn.

You have been added to Brian Horn's favorite list.

You can also sign-up to receive email notifications whenever Brian Horn releases a new book.