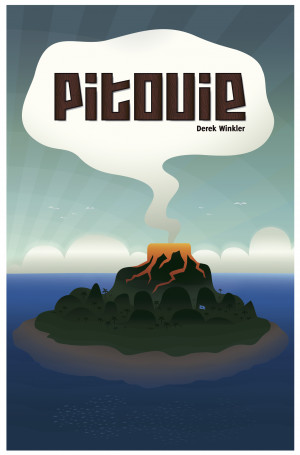 By Derek Winkler
Rated 5.00/5 based on 1 reviews
Pitouie is a fleck of rock in the South Pacific. It has no industry and no natural resources. Otis Wilson of Waste Insight magazine is enroute to the island. He thinks he's going to watch an innocent nation reach for the soap in the prison shower of international commerce. What he's going to find is much stranger and has something to do with an Inuit village in the Arctic thirty-five years ago.

Federated Pitouie
The Pitouie Development Corporation LLC strives to achieve growth by synergizing with international corporate partners in a paradigm encompassing mutual benefits. Contact our public relations department to learn how Federated Pitouie can free your company to operate creatively and without the restrictions of conventional, regulated international business.

Derek Winkler describes himself as the editor of an obscure trade publication, much like Otis Wilson, the main character in his well received début novel, “Pitouie”.

Fresh out of school with a degree in journalism, Otis took a temporary job with Waste Insight magazine. Seven years later he's still there, with his hoped-for career in serious journalism as intangible as his relationship with his current girlfriend.

When asked by cynical veteran editor Merle to write up yet another dreary press release for the magazine, Otis sees a glimmer of hope in his future. A chance for a real story.

Pitouie is a distant, a VERY distant South Seas island with a unique proposal for the mega-corporations who are always on the look out for new places to dump their toxic waste. Pitouie wants to offer them something a little extra special, if they're prepared to pay.

Alternating chapter on chapter for around the first half of the book, is the story of Lars, another disaffected young man who has drifted into a job with bleak prospects.

Lars works as a radar operator at a US/Canadian Distant Early Warning station on the icy Canadian coastline during the nineteen seventies, keeping watch for Russian bombers that have been rendered obsolete by ballistic missile technology.

This earlier portion of the story is perhaps the more interesting tale, and Lars the more fully portrayed character.

It's impossible to say too much about the plot without giving the game away, and there are games aplenty in play. What remains to be seen is who emerges the winner.

Derek Winkler has an assured grasp as a writer, with an excellent turn of phrase. The story relies on wit and cleverness, with characters progressing just enough to advance the plot without getting in the way of the story.

As a bonus, the language and tone of the work is restrained enough that it would make a very good book for discussion in class for ages from early teens and up, raising as it does many relevant issues about global waste disposal in a way which is never boring.

You have subscribed to alerts for Derek Winkler.

You have been added to Derek Winkler's favorite list.

You can also sign-up to receive email notifications whenever Derek Winkler releases a new book.