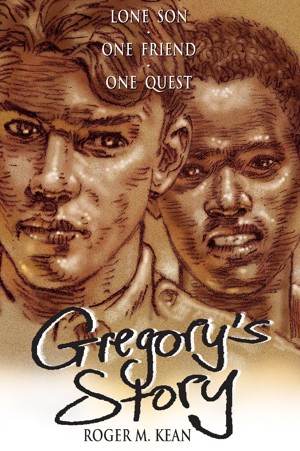 Rated 5.00/5 based on 1 reviews
Gregory Hilliard wants to discover his father’s fate, deep in the Sudan, at the hands of Dervishes 15 years before. Attached to General Kitchener’s army in 1897, he goes to defeat the Mahdist fanatics with his friend and lover, the Ja’alin Zaki. Gregory faces a tragic and at the same time life-enhancing mystery with its roots in far away England… and one which might yet rip the two lovers apart. More
“Roger Kean writes like the rest of us breathe… effortlessly.”
— Goodreads author Summer Michaels

A heavy burden rides the shoulders of young Gregory Hilliard—to discover the fate of a father he never knew. Did the elder Hilliard die with Hicks Pasha’s army at El Obeid in 1883 or, as his mother fervently hopes, did he somehow escape the massacre there by the fanatic Mahdist Dervishes?

And then there is the puzzle of his real name. Is he who he thinks he is? Born and raised in Cairo, fluent in native languages, Gregory is pitched into the heat of war after his mother dies. The teenager makes his way by joining General Kitchener’s Nile campaign to retake the Sudan from the Khalifa’s Mahdist armies. In doing so Gregory hopes to find out what happened to his father. Two spies—Edward and Richard Rainbow—help in his quest, brothers with their own dark secret. But his greatest support comes from the Ja’alin Zaki, the love of his young life, his friend and soul-mate.

In a world that refuses to recognize the right of young men to love and in an era that looks down on the “inferior” natives, Gregory faces his most difficult battle for personal happiness. Success will bring him and Zaki fulfilment but also unravel a tragic and at the same time life-enhancing mystery with its roots in far away England… and in the solving of it, one which might yet rip the two lovers apart.

Another masterpiece by Roger Kean. The story follows the lives of Gregory Hilliard, an English boy born in Cairo, Egypt, and his childhood companion, Zaki, a native born Sudanese, from their early childhood to their growth and maturity as young men.
Gregory Hilliard’s parents had moved to Egypt on account of his mother's illness, which required she live in an hot dry climate. His father joined the army to support his family in the country, and was on a mission when he was lost, presumed dead by the Army, when Gregory was just an infant.
Gregory's mother, Anne Hilliard, instead of retreating back to England, choose to continue to live in Cairo, Egypt. She worked hard and was able to support herself an infant in relative comfort. She brought up Gregory in the belief that his father might have survived, and thus Gregory wants to find out exactly what happened to his father all those years ago. In pursuit of that quest, Gregory joins the English army when he was still very young.
Roger has shown in incredible detail the nuances of that period of history of those parts of Egypt and Sudan. We also have a short period in which we see the intricacies of English society during those times. There are periodic cameo appearances by the Rainbow brothers, whose enthralling story was shown in Roger Kean’s previous book.
Gregory's early life and upbringing in Cairo explains satisfactorily why he is able to blend in the enemy lines while on missions for the English. His hair-raising experiences while being an officer in the English army and the solid support of Zaki, who is shown to be in as much risk as Gregory himself due to his "Jaalin" ancestry, kept me engrossed for hours.
Roger has an observant eye to description. The battles of that period are dissected. One missing thing, which would have placed the cherry on the cake, would have been if Roger had included a map of the region as well. From the details of the battles, it is clear that Roger has either an encyclopedic knowledge of the area or has really researched it well. Thus, the absence of a map is slightly puzzling. I am one of those readers whose enjoyment is exponentially increased by reading about a battle, and then referring to the map to see its strategic impact on the overall war. However, that is just a personal preference, and other readers might not find this quality a lack.
Roger highlights the horrors of war indirectly by showing the impact it has on the innocents, the widows, the orphans, the grieving parents of the combatants. However, he also tempers the bleakness by giving a glimpse of hope after the battles are over. Life goes on. The survivors and the widows return to their homes and start rebuilding their shattered lives afresh. This aspect of the story is awesome for readers like me, who do not care for books with unmitigated tragedy for chapter after chapter after chapter.
The quality I personally most admire about Roger's writing is that he has an instinctive grasp of the humanity of everyone, not just the protagonists. I have said it before and will say it again, Rogers' created villains are not simply villains just for the sake of doing evilness; they always have some defined motive for their actions. Most people are shown in shades of grey, they have some redeeming quality inside them. This makes the entire story believable and much more engrossing.