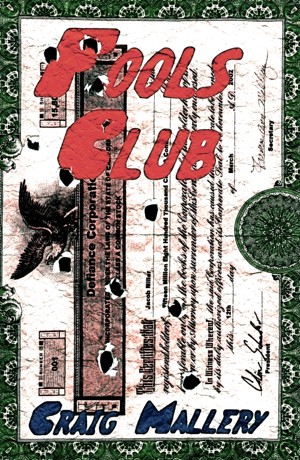 The story unfolds over a weekend in December. As Colin meets with his campaign manager, Jacob is getting together with the Fools Club, a bitter and eccentric foursome of former employees who go drinking each month. Membership requirements are depressingly simple. Each Fool must have held a minimum of $10 million in Defiance stock — and never have sold a single share. Jacob, once worth over a billion dollars, holds the dubious title of King of the Fools. What begins as an innocent night of drinking quickly turns ugly. Convinced that Colin embezzled millions and destroyed the company, the outraged and drunken Fools decide a prank is in order. After egging Colin's mansion with a MacGyveresque high-tech slingshot, they sneak inside, where they stumble upon a secret ledger that documents Colin's embezzlement scheme that siphoned off over a $100 million from Defiance. The Fools want to turn it over to the U.S. Attorney, but Jacob still can't bring himself to hurt Colin.

These two stepbrothers suddenly find themselves locked in a dangerous struggle in which all the tensions and jealousies from their childhood will play out. For Colin, everything is on the line. Until now, all of his dreams have come true. But overnight, with the loss of the ledger, his carefully crafted life is on the verge of unraveling. He will stop at nothing — including hiring a professional killer — to keep his dreams alive. Ultimately, Colin's ruthlessness spirals out of control and Jacob becomes the target. To survive, Jacob must overcome his deepest fears, stand up to the one person he had always idolized, and discover strengths he never knew he had. And to triumph, he must enlist the help of the Fools Club.
Download: epub mobi (Kindle) pdf more Online Reader
rtf lrf pdb txt
Price: Free! USD
Add to Library
Create Widget
Tags: thriller technology silicon valley startup company hitech palo alto embezzelment financial thriller

When is your next book coming out?

(reviewed 44 days after purchase)
Bill Furlow reviewed on Feb. 21, 2011
(no rating)
What an intelligent, taut thriller this is.

Set in Northern California’s Silicon Valley, the “club” of the title is made up of four geeks who failed when they had the chance to profit from their high-flying (for awhile) software startup, Defiance.

Jacob Miller, the engineering genius behind Defiance, never sold a single share of stock, so when the bubble burst and Defiance’s market cap fell from $15 billion to zero, he earned the title King of Fools.

Not part of the club, living large and planning a run for the U.S. Senate, is Jacob’s stepbrother and former Defiance front man Colin Schaeffer. Why is Colin rich and Jacob broke? The feds have been asking the same question but have failed to come up with evidence to indict Colin for any kind of wrongdoing.

The night the U.S. Attorney announces an end to the investigation, clearing the way for Colin’s entry into politics, the Fools gather to literally cry in their beer and bemoan the unfairness of life. After sufficient pitchers are consumed, they come up with the un-Mensa-like idea of egging Colin’s beautiful gated mansion. This childish prank sets in motion events that will reveal the source of Colin’s wealth, threaten his family and career and lock the stepbrothers into a violent dance with a Melissa Etheridge-obsessed lesbian assassin.

Though Jacob is bitter about Colin’s good fortune in the face of his own failure – not the least of that good fortune being his marriage to Jacob’s classy former girlfriend – when he has the opportunity to wreck Colin’s life, he cannot do it. The bonds of childhood and the gratitude for the golden boy who protected him from bullies and tried to teach him about sports are too strong.

Colin suffers no such pangs of loyalty, to Jacob or anyone else. When his campaign manager offers to put him in touch with the one person who can make any lingering concerns about law enforcement go away, he scarcely hesitates before reaching out to the anonymous pimpmyride8@hushmail.com.

A soulless phony who somehow sees himself as a cross between Bobby Kennedy and Teddy Roosevelt, Colin is quickly out of his depth in dealing with the woman who calls herself “Mel” and whose only ambitions are to work as a bodyguard for Etheridge and to become a single mother.

In the end, of course, at least one of the three must go down, and it becomes a question of whose bad judgment will turn out to be the most catastrophic.

We don’t find any bio information on Craig Mallery. Based on his easy descriptions of the Silicon Valley, he apparently is or was part of that world of dot.coms, venture capitalists, fast fortunes and equally fast collapses.

The writing in Fools Club is crisp and clean. The plot moves quickly but not at the expense of the players’ depth. Each character is believable and recognizable except perhaps Patrini, the beautiful female Fool who secretly has the hots for Jacob. The techie/geeky stuff serves the story well and doesn’t compete with it.

Like the other books we recommend, if it were published under the name of a well-known writer and you paid $25 for it, you would not be disappointed. If you compare Fools Club to a David Baldacci novel – a fair comparison for the genre – you’d find the writing much better, the plot more interesting and the characters more believable.

For reviews of other Smashwords books, see www.greatbooksunder5.blogspot.com.

You have subscribed to alerts for Craig Mallery.

You have been added to Craig Mallery's favorite list.

You can also sign-up to receive email notifications whenever Craig Mallery releases a new book.