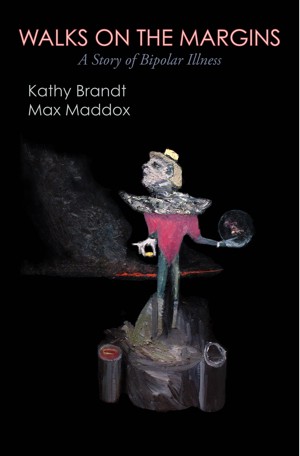 Walks on the Margins: A Story of Bipolar Illness

2014 CIPA Book Award
Mother, Kathy Brandt & son, Max Maddox weave a single compelling story of what it means to suffer from mental illness. Max takes us under the seas of psychosis as Kathy narrates her struggle to decode her son’s disease in a world beset by institutional failure. A fiercely candid story about the emotional turmoil and confusion of those who struggle with bipolar disorder. More
2014 Colorado Independent Publishers Book Award
2014 Pikes Peak Library Golden Quill Award
2014 KINDLE BOOK AWARD-Semifinalist.
A mother/son memoir by Kathy Brandt & Max Maddox In Walks on the Margins, Kathy Brandt offers a valiant and unapologetic struggle of a mother trying to find a semblance of her son as they are both wrapped in the turmoil of an illness once known as Manic Depression. Bathed in gentle compassion and exuding the most resilient love for her son and family, Kathy’s narrative favors a compelling witness-writing that shows how it feels to be within the circle of those intimately affected by mental illness and in a world beset by institutional failure.

Max Maddox’s attentive gaze depicts reality through the lens of the artist he is yet to become, unearthing poetry, rhymes and a broad palette of colors in the most sordid of places. With a callous, ruthless self-scrutiny, he retells both his manic and depressive episodes. At times unnerving, the fierce honesty of his prose is ameliorated by humor and a highly visual writing style reminiscent of the vanguard novellas. Max conveys a playful and unsettling beauty that he scratches off the seemly dim surface of day-to-day life.

It’s the whiz kid and his vexed mother. His emotional unrest and her unhindered kindness. Mother and son weave their narratives into a single powerful story about coming to terms with bipolar disorder.

A finalist for the Iowa Review Award in Nonfiction.

WALKS ON THE MARGINS: A STORY OF BIPOLAR ILLNESS
Author Bios


Kathy Brandt is a published author who taught writing at the University of Colorado for ten years. After her son, Max, was diagnosed with bipolar disorder, she became active in mental health issues. She was on the Board of Directors of the National Alliance on Mental Illness in Colorado Springs (NAMI-CS) for six years, and served as President. In 2012 she received the NAMI National Award for her outstanding service to the organization. She is currently the NAMI-CS liaison to the Mental Health Court in Colorado Springs. Kathy has published four novels with the Penguin Group. She has a B.A. in English and an M.A. in Rhetoric. She lives in the mountains of Colorado.

Max Maddox has a BA in philosophy from Grinnell College and an MFA from the Pennsylvania Academy of Fine Art, where he was nominated for the Joan Mitchell Award and received the Fellowship Trust Award. He has exhibited his work in galleries including The Slought Foundation, The Print Center of Philadelphia, and the Ellen Powell Tiberino Memorial Museum. He was the preparator, photographer, and curator at the Sun King Gallery and Pyramid Museum in Philadelphia and also assistant to artist and curator Richard Torchia, Director of Arcadia University Gallery. He now lives in Colorado where he teaches and continues to pursue his career in art.

You have subscribed to alerts for Kathy Brandt.

You have been added to Kathy Brandt's favorite list.

You can also sign-up to receive email notifications whenever Kathy Brandt releases a new book.