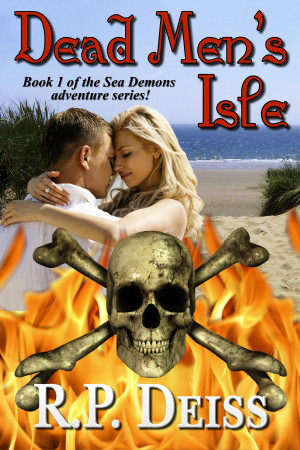 By R. P. Deiss
While on a hunt for the treasure of famed pirate, Captain Kidd one of the treasure hunters is captured and killed by modern day pirates. Enraged former Navy Seal Rick Chambers calls up his old Seal team to hunt for the treasure and avenge their friend's death. The fight ends on the bloody sands of Dead Men's Isle, or does it? More
When native Jamaican Danny Mazuzu's grandfather died, he left him a map that had been in the family for over 150 years. The map showed the supposed location of Captain Kidd's hidden treasure on Dead Men's Isle. Danny's family had been looking for it unsuccessfully for all those years.
Danny enlists the help of his charter boat partner, Chris Chambers and his brother, former U.S. Navy Seal Lieutenant Rick Chambers. They, along with first mate Gene Barclay and friend Karen Jacobs go on an adventure of a lifetime that suddenly turns tragic. One member of the group is tortured and brutally killed for the treasure's location by modern day Caribbean pirates.
Enraged Rick calls up his old Seal Team to avenge the murder and find the treasure. The battle lines have been drawn in the sand. Pitting blood thirsty pirates against America's finest fighting men. The battle erupts and goes on until the exciting conclusion on Dead Men's Isle. But is this really the end of their troubles?
A man is hidden in the pirate's ranks so evil and diabolical he would gladly sacrifice his only son's life for his own greedy monetary gain and revenge that's been 40 years in the making. The evil must be hunted down and terminated. The chase leads the team all the way to the steps of the United States Supreme Court where justice will ultimately live or die.

Hi, I'm a 54 year old Wisconsinite. I served in the Navy during the closing days of Vietnam as part of Operation Frequent Wind. I held a top secret clearance as a radioman. I honed my typing skills on the keyboard of a teletype while serving my country. I'm a 3 term commander of our American Legion Post and designer of our Veterans Memorial. I spent 19 years in the Boy Scout program including 8 years as scoutmaster and helped 11 boys reach Eagle Scout. I also did 11 years as committee chairman. I've written and given many speeches on Veteran issues. . I live in Northeast Wisconsin with my wife Darlene, I have two grown step daughters and six grand kids. I found that i have an insatiable love of writing. I did the first draft of Dead Men's Isle in three weeks. I also did a thriller called Copperhead which will be coming out in february and am now doing s sequal to Dead Men's Isle. I have now written a total of 5 books for your enjoyment. I hope that I can bring you into the pages of my books for a journey that will transport you on an adventure of a lifetime!

About the Series: Sea Demons 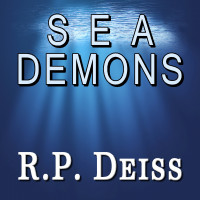 I’m Rick Chambers, former commander of a disgraced, disbanded SEAL team. I reformed my team when my brothers’ call for help resulted in an attack by a band of modern day Caribbean pirates while we searched for pirate treasure. As a result of these events, we formed a group of mercenaries called Sea Demons. Now we handle covert situations where our government cannot be involved.

You have subscribed to alerts for R. P. Deiss.

You have been added to R. P. Deiss's favorite list.

You can also sign-up to receive email notifications whenever R. P. Deiss releases a new book.