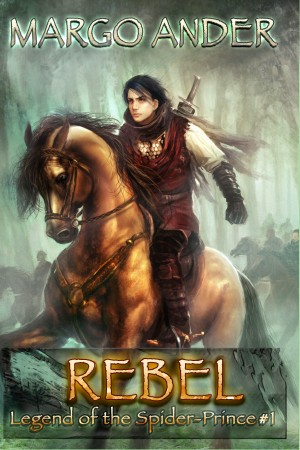 REBEL: Legend of the Spider-Prince #1

When blood-feud and rebellion escalate into war, a young rebel becomes entangled in a deadly web of magic, intrigue, and revenge as a widening conspiracy threatens to overturn governments, collapse civilization, even endanger the very existence of life on Eryth—and make him a legend.

Wyl has been a lot of things in his short life: an outcast, a rebel spy, a bodyguard, a mercenary’s foster-son, and the best pupil of Trascolm’s greatest warlord. But when a battle magically turns against the rebels and his leader flees into hostile, neighboring Dremnar, Wyl is called upon to be what nothing in his brutal life has prepared him to be—a diplomat.

He’s in over his head, making enemies instead of allies, and when a new menace threatens his leader, it will take every dirty trick he knows to keep her alive—if he doesn’t get himself killed, first.

Ever since I learned to write, I have been secretly concocting epic tales with a dark and devious twist. Unfortunately, I was also a night owl and a seat-of-my-pants writer, so my characters always ended up in situations from which there was no escape—which forced me to learn the craft side of storytelling, and the miracle of outlining. When I started getting up at 0230 hours instead of going to bed at that time, I discovered—who knew!—that I wrote much better when fully-conscious. Despite predictions, when I published my debut novel, REBEL: Legend of the Spider-Prince #1, the world didn’t come to an end; I didn’t even lose my day job.

I like guy talk, doing the kind of stuff that mostly guys like to do, and hanging out with guys—heck, I’m even married to one! During my Air Force career, I was an aircraft maintenance officer and a Minuteman missile combat crew commander. I earned Expert Marksmanship ribbons with both the M-16 and .38 Colt Combat Commander—both left-handed and right-handed. I’ve fenced, shot longbows, and given mounted archery demonstrations. I’ve practiced ninpo, drawn blood with my first sword, and continue to study military science. I’ve competed in Combined Training horse trials, and trained horses in dressage, jumping, and saber-duels—and collected plenty of injuries, saving myself tons of research!

If you enjoy my books, please join my tribe! Visit me on the web at http://www.margoander.com and sign up for my newsletter to receive the first news about upcoming releases and special appreciation for your support.

About the Series: Legend of the Spider-Prince

An epic fantasy with a dark and devious twist, a coming of age thriller set in a land where men have unbridled influence, but women hold the reins of power.

When blood-feud and rebellion escalate into war, a young rebel becomes entangled in a deadly web of magic, intrigue, and revenge as a widening conspiracy threatens to overturn governments, collapse civilization, even endanger the very existence of life on Eryth—and make him a legend.

You have subscribed to alerts for Margo Ander.

You have been added to Margo Ander's favorite list.

You can also sign-up to receive email notifications whenever Margo Ander releases a new book.