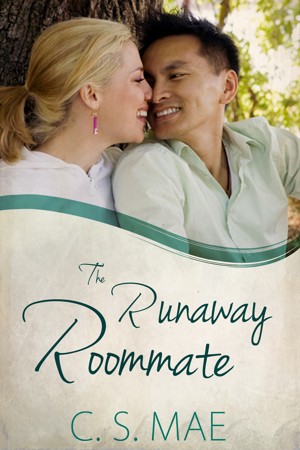 Rated 4.00/5 based on 5 reviews
Casey Peters has a problem and that problem is the half-Korean hottie that moved in when her former roommate moved out.
Now her life has become like an episode from one of her favorite dramas, complete with: crazy exes, roommate shenanigans and confusing plot twists.

About the Series: Kdrama Chronicles

Four Ladies who adore kdramas and romance, finding their own love stories.

This is one of the two books I read and finished during my vacation. I remember being annoyed by several aspects of it while I was reading it, but my overall feelings upon finishing were more “meh” than rage-y. However, organizing my notes in order to write this review really highlighted for me just how many things I disliked about this book.

I suppose I'll talk about the good aspects first and ease into the rest. I downloaded this because it was free and because the “Kdrama” bit in the series title caught my eye. In the end, the most prominent K-drama-related aspects were the italicized bits at the beginning of every chapter, which featured Casey and her friends talking as they watched K-dramas. K-drama titles were rarely (never?) used, but, even with my limited experience, I think I was able to identify a few of them. I wish Mae had included some kind of guide at the end that identified specific shows referred to in the book, but, even without definitive answers, it was still fun trying to guess them.

Casey's “voice” was relatively likable, despite the fact that she occasionally said things that made me raise an eyebrow. For example, I thought it was more than a bit hypocritical to state that she didn't support game piracy but did think it was okay for her and her friends to get bootleg K-dramas. Her reasoning was that K-dramas are hard or impossible to find in America, which made me immediately check to see when this was published: 2012. While I think legal, English-subtitled DVDs may still be somewhat difficult to get, I know of several legal sources of streaming K-dramas. Dramafever, for example, went live in 2009.

The romance aspect of the book was incredibly bland. There were really only two obstacles between Casey and David: David's girlfriend and Casey's supposed lack of attractiveness. The issue of David's girlfriend was essentially dealt with 9% into the book, as David mentioned that he felt Shannon was too high maintenance. It was inevitable that he would break up with her. As far as Casey's attractiveness went, David seemed to like her right from the get-go.

The problem was that Casey was an Unhappy Fat Person. One of her best friends commented disapprovingly about Casey's choice of pizza over her own choice of grilled chicken salad without dressing. She referred to herself as a "dumpy slob" who was four sizes heavier than she used to be a few years ago. Her status as an Unhappy Fat Person essentially cost her a promotion – she didn't have the self-confidence and enthusiasm her boss was looking for. Even though Casey's boss never mentioned her weight, Casey's self-confidence and enthusiasm plummeted around the same time she gained weight. Plus, Casey herself brought her weight to my mind by mentioning that her boss was "supermodel thin" and basically the exact opposite of her in every way.

It wasn't until later in the book that further context was given. Casey became depressed after her boyfriend moved out, moved away, and dumped her in a note he left behind. She no longer enjoyed running, and she stopped doing all the healthy living stuff her boyfriend had convinced her to start doing. I initially expected the romance to develop either after Casey lost weight and started eating healthy again, or while she was in the process of doing those things, so it was a surprise when David showed clear signs of interest only a quarter of the way into the book. Had she not doubted her own attractiveness (because Unhappy Fat Person), the two of them might have gotten together much sooner.

Casey never did go back to the lifestyle she had while dating her old boyfriend, but she did get back into running. It was framed as her getting back into doing something she enjoyed rather than as an activity she was doing in order to lose weight, which was nice. On the minus side, although weight loss was never mentioned in numbers, one of her friends did comment that she was gaining some attractive “curves” and asked her if she was dieting. Also, Casey and David didn't have sex until after this weight loss, so there was still an element of “sex and romance are for thinner heroines only.”

Whereas the Unhappy Fat Person stuff wasn't in the book's description and took me by surprise (if that's supposed to be Casey on the cover, she doesn't look much like a "dumpy slob" to me), I suspected right from the start that I might have problems with the whole “half-Korean hottie” aspect. The book could have benefited from chapters or sections from David's perspective, or more scenes involving David and his mother, anything to make him seem more like a complete human being. Because that, combined with some of what Casey and her friends said in the italicized bits at the beginning of each chapter, made it seem like David's biggest draw for Casey was that he half-Korean and good-looking. On-page interaction with David was generally pretty superficial. His mother came by maybe once, and of course she and Casey instantly got along because Casey liked the Korean food she'd brought and they both liked K-dramas. Again, just superficial stuff. There wasn't much detail about David's family life, his work, his goals, anything.

This is one of those times when the process of writing a review for a book might have actually lowered my opinion of it. At any rate, there are currently two more books in this series, but I have no plans to continue on.

At the end of the book, there's a note from the author about Korean dramas.

3.5 out of 5 stars! This exciting, hilarious, and sweet novel keeps you on your toes while you follow Casey throughout the antics she gets into! David and Casey were similar in so many ways that it was easy to want to root for them to finally get together.

I really liked David and how he handled everything Casey through at him, even though I am curious as to what really happened between him and his own "ex." Plus, I loved his mother and Casey's friends; they were all funny in there own unique ways. It'll be interesting to see what happens to this group next.

I recommend this novel to anyone who likes Kdramas and/or whoever is a fan of romantic comedies!

Review By: From Me to You ... Book Reviews
(read more of this review and two teasers on my blog)

I thoroughly enjoyed this book. The reading of it did not require knowledge of Kdrama or any other ethnic/cultural information. The current and back moments of the plot worked smoothly. I look forward to the next book in the series.

Wonderful read! Loved the Kdrama aspect, wasn't familiar with Kdramas before but after googling all the hot actors mentioned in the book I'm hooked!

You have subscribed to alerts for C.S. Mae.

You have been added to C.S. Mae's favorite list.

You can also sign-up to receive email notifications whenever C.S. Mae releases a new book.