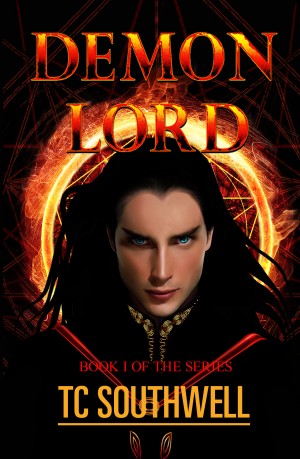 Underworld and Overworld! A demon able to bind the two! Bane is pure evil and he is powerful, he is the Demon Lord, and only one person stands in the way; a young girl, a healer.

I thoroughly enjoyed this and have no hesitation in giving it 5 stars. As with all T.C. Southwell’s books, this is well written and imaginative. I will be reading more of her work!

Absolutely amazing story from start to finish. The character depth and story is truly riveting and reading this over the last few weeks at work has been such a pleasant experience. Just bought Dark God and look forward to reading more from the series. Great piece of writing.

O My O My……….
Great book
Wish there was a button for purchasing all books in a series!
Very interesting turn on the ‘Bad’ guy!
TC – let me know should you ever want to add some free (image credits) pictures/images for inside the books – I own thousands.
You other authors also.

(review of free book)
cookie wilson reviewed on Aug. 13, 2011
(no rating)
I came across one of her books totally by accident and I FELL IN LOVE!!!! I was a big Kontz fan now she is my top favorite! Now I cant stop adding more of her books to my ereader. I actually look forward for any & all of her future works Keep up the good work......

Overall, I enjoyed the book. I thought it was well written and exciting. Admittedly though, the story line of the terribly abusive relationship endured by the female character while trying to break through to the man who is really good inside was kind of irksome and kept me from enjoying the book even more.

I have read all of her published work on "Smashwords". The "Dark God" series, of which "Demon Lord" is the first, is a fast paced, fairly short, novel that is part of an much larger tapastry. Hopefully she will continue the sage in a timely manner (up to #6 have been released). I await future additions to the series with bated breath!

The first in a series, TC Southwell’s Demon Lord tells the story of Mirra, a young healer who cannot find it within herself to hate, and Bane, a Demon Lord who seems incapable of caring for anyone.

Bane has been sent to the Overworld by his father, the dark god Arkonen, to destroy the seven blue wards that trap him in the Underworld. What Bane doesn’t realise is that Arkonen is not his real father – Bane was stolen from his human mother at birth, raised as Arkonen’s son and trained in the usage of the dark powers, because only a human can enter the Overworld and free Arkonen from the Underworld.

Mirra, too, has been unknowingly raised to serve one purpose only: the purest and most powerful of healers, only she has a chance of turning Bane from his task.

Near the start of this story, Mirra is captured by Bane’s army of humans and dark beasts. Bane discovers that he is unable to cause her pain and, determined to discover a way in which to hurt her, he ignores his father’s orders to kill her immediately.

Despite being forced to be witness to the murder and mayhem that Bane causes all who cross his path, Mirra tries to ease the pain that using the dark power causes him. Bane, however, is convinced that she is trying to kill him, and becomes all the more cruel to her.

It’s certainly good to see local fantasy talent blooming, and, although I’m not a lover of the black and white version of ‘good versus evil’, I thoroughly enjoyed Demon Lord. Anyone who enjoys a good fantasy filled with deceit, betrayal and a little romance thrown in on the side should enjoy Demon Lord.