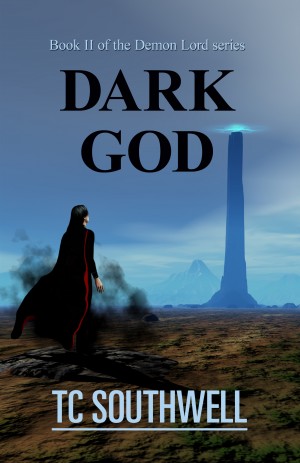 By T C Southwell
Rated 5.00/5 based on 7 reviews
After breaking the Seventh Ward and unleashing the dark god Arkonen upon the Overworld, Bane, Demon Lord, is close to death. The Black Lord has betrayed him and left him to die from exhaustion and the ill effects of the dark power. Only the young healer’s fragile and misunderstood hold on his heart makes him cling to life, and Mirra begs him to save the Overworld, as only he can, but will he?

What I found distracting was the constant use of the phrase "word of power" during the fight scenes. How hard could it be to make one up? Also, just because it doesn't have sex doesn't mean it's already ok to claasify this as YA without a word of caution, the violence is epic.

Other than those very minor concerns this book is incredible. The way the tension was sustained is amazing. No scene was superfluous, the story was tight while maintaining the same vvid style of storytelling.

Also, few writers would bother tying up lose ends. Most romance stories end with the declaration of love and leave everything else hanging This book was VERY thorough, an awesome finish to Book 1.

(reviewed the day of purchase)
Vanessa Finaughty reviewed on May 12, 2013

Dark God, the thrilling sequel to Demon Lord (the novel that first piqued my interest in fantasy reading as an adult), continues the saga of Bane, the Demon Lord. Bane, left vulnerable and near death by his ‘father’, the dark god Arkonen, is saved by the healer, Mirra, whom he held captive for most of the first novel.

Mirra, the most powerful healer in the Overworld, is a gentle soul and unable to hate Bane for the ordeals he forced her to endure. Weakened, Bane allows her to take him to her temple, where the elder healers plan to heal him… but will Bane allow himself to be healed at the temple? If not, the dark magic that writhes in his body could kill him, if Arkonen doesn’t get to him first…

Bane struggles to understand the kindness offered to him by the healers, and attempts to come to terms with his father’s betrayal. He is suspicious and wary of the healers’ supposed good intentions, and his raging temper and the coldness that emanates from him make many of the healers ill at ease. Time is running out – the goddess Lyriasharin is growing weaker with each passing moment, and the fire that protects the abbey to which Bane has fled to regain his strength is growing dim.

Will Bane be able to defeat Arkonen and save the Overworld? Will he be able to overcome the dark urges that flood his mind, and admit his feelings for Mirra? Will he be willing to give up the corrupting dark power if he banishes Arkonen? Will either of them even survive Arkonen’s rampage through the Overworld? Most importantly, will Bane realise, before it’s too late, that in order to defeat Arkonen once and for all he will have to do something he has never been able to do before – ask for help?

Dark God is a gut-wrenching tale of the devastating effects of betrayal, tempered by the offer of unconditional love, friendship and forgiveness. Through Bane, Southwell shows that even the darkest soul has a chance to turn to the light, no matter how slight that chance. Dark God is a heart-warming story that had me in tears in places, and giggling in others as Southwell’s undeniable sense of humour seeped into the telling. A must-read for any fantasy lover.

A very enjoyable read. It reminds me of the Goodkind style, but at a much faster pace. I would certainly recommend it.

(reviewed 73 days after purchase)
Barbara Barr reviewed on Aug. 18, 2012
(no rating)
I'm a big fan of Terry Goodkind and Robert Jordan and I agree that Southwell's books are comparable but move faster. Of course, the size of each book is considerably smaller than the aforementioned authors but as some authors never learned, bigger is not necessarily better.

Can't wait for the 8th book and those that follow. Great job T.C. Southwell!

This along with all T C Southwell epics is well written and flows along.They all belong on the 'library, shelf alongside Terry Brooks, Terry Goodkind, Robert Jordan and their ilk.

I would definitely recommend this book

(reviewed 22 days after purchase)
Tourlou reviewed on July 13, 2011
(no rating)
I have read the first tome and I have very liked it. The story and the characters are amazing, the tome two is even better. I think the choice of a unconventional hero is original, even if his actions are sometimes evil, the readers will love this character ! The same for the opposite character, Mira. The progression of the story is just in the right tempo with many surprises, a lot of action and magic. I will certainly buy the next tome

OK! I offically HATE this author;-) Her books are SO GOOD, I cant stop reading them!!!Even though this book ended nicely and it is possible to stop here, I enjoyed it SO MUCH, I gave up and have purchased all of the rest in the series!! That makes a total of 6 books so far, 1 free and the rest I paid for!! I usually enjoy the free books, and they have to really be good for me to buy any. I dont usually write reviews, unless I am impressed. She has an incredible imagination to create these. Enjoy!!