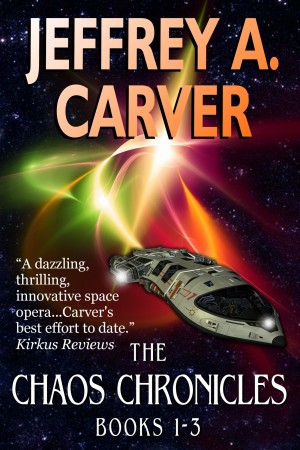 Complete with new Afterwords on the writing of each novel—exclusive to the ebook editions!

Reviews of The Chaos Chronicles (Books 1-3) by Jeffrey A. Carver

John Bandicut is having a rough life. He lost his family in a tragic accident. He suffered a botched medical procedure that left him prone to psychotic episodes. If that isn’t enough, an alien on a suicide mission inhabited his brain and conscripted him into service. When the voice in his head tells him what he must do, he has a choice: play it safe and risk losing everything or take a leap of faith that will almost certainly cost him his life.

Neptune Crossing has moments of high tension and intense action metered by the hum-drum existence in an outer solar system mining operation. I enjoyed this story overall. The ending left me a bit hollow but in all fairness, this is book one in a six book series. The issue I had with the ending may well be resolved deeper into The Chaos Chronicles.

John Bandicut is on a grand adventure. After being pressed into service to save the Earth by the mysterious Translator in Neptune Crossing, he’s been hurdled out of the galaxy to an immense ship-world where he faces a threat as great as a killer asteroid but with an intelligence behind it. Along with the alien consciousness that lives in his head, Bandicut and his company of new friends risk it all to save the strange world where they’ve been stranded.

Carver has a knack for writing extended action scenes that make me feel like I’m on a runaway roller coaster ride. This book was no exception in that area. I thoroughly enjoyed Strange Attractors and I’m already reading book three, The Infinite Sea.

On a side note, I see a possible solution to the issue I had with the ending of Neptune Crossing. As I read the final pages of Strange Attractors, I had to pump my fist in the air and shout, “Yes!”

John Bandicut is in over his head this time, deep under an alien sea. In book three of the Chaos Chronicles, he and his company of friends have been tasked with settling a dispute between people of the sea, and land dwellers while trying to figure out what mysterious force living at the bottom of the abyss is trying to kill them all.

The under-sea habitat and cramped submarines in this story kept me feeling the need to seek wide open spaces and fresh air.

Carver tossed in a few snippets from the life of a character from book one and I believe that the story is only going to get more interesting from here on out. I’m looking forward to starting book four.

I find that I have to agree witj previous reviews.
Neptune Crossing held my attentioneven when little was happening and I am basically a 'hard' science fiction reader.
The later 2 books are described by the author as basically being allowed to write themselves and 'on the evidence' I think that this is not a good way to write. I found them tedious and not very connected internally. There were , I suppose, too many Deii ex machina for my taste. However there are hints that the 4th book will tie everything together so I'll probably buy that too.

Like Nikolaus, I enjoyed the first book, with its excellent plot and characterisation. However, I found the second and third books rather slow and tedious. It seemed that much of the material was not essential to the plot and merely served to extend the length of the book.

(reviewed 21 days after purchase)
bernie last reviewed on Feb. 2, 2011
(no rating)
So far I'm having a tough time reading this book.It's very slow going and I've read five other books after starting this one- because I'm losing interest in it.If the other two are not as good as the first ,as the other reviewer said ,then I may never finish them.

The first book (Neptune Crossing) is truly amazing, and I'd give it 5 stars. The entire science fiction flair stems from one really unusual alien live form and an extremely powerful and mysterious machine, but this is more than enough to deeply capture the reader.

The other two books, unfortunately, are a big disappointment. They feature tons of aliens and alien machinery, but they all act just like some random guy you'd meet on the street. In contrast to the first book, the aliens don't appear alien at all. In addition to that, the actions of the party that gathers around the protagonist seem totally without reason (unreasonable as in stupid, and not as in alien, that is). Moreover, the main storyline in book two is never truly resolved, at some point the "problem" (whose nature never became clear), is basically just declared as "solved".

The author occasionally switches perspective to some of the other characters, but these episodes are so short that they don't really give any insight into the character but just interrupt the flow of the book.