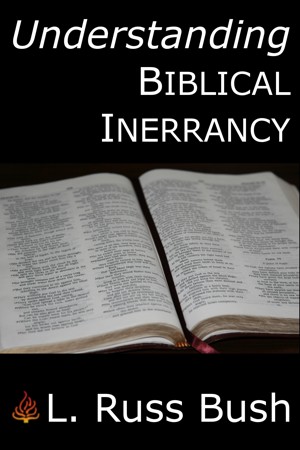 By L. Russ Bush III
I’ve given away over a dozen hardcopies of this book to people in my church, and each year people ask if I have more. This short book is easily approachable and meant to be understood even if you have little or no theological training. This book was written in the hope that those who seek truth may find common ground in a commitment to Christ as He is made known to us through God's truthful Word. More
A major element of historic Christian belief about Scripture has been the doctrine of biblical inerrancy. Many theologians and Bible teachers today, however, seem to be uncomfortable with the concept of biblical inerrancy. The term is subject to misunderstanding, of course, but even the term “Christian” is subject to misunderstanding; nevertheless, we continue to use the term “Christian” without hesitation. We simply define the term properly and then use it correctly. Many important theological terms–such as election, or depravity, or missions–continue to be used despite semantic controversy that may and does arise. Semantic problems relating to “inerrancy” may also be overcome if misunderstanding concerning definitions or word usage is really the only problem.

Dr. Bush spent one-half of his life teaching in the Southern Baptist seminaries. Before that time, he was himself a student: about one-third of all his student days were given to theological studies. He talked about the Bible with literally thousands of students, colleagues, and Christian friends, and read many expositions of the doctrines of our Christian Faith by careful theological writers. His dialogs with students and others encouraged him to write out some of his own views on this rather controversial subject.

Therefore, in these pages he set forth his understanding of the “Scripture principle” that undergirds orthodox Christian beliefs. Dr. Bush offers these thoughts in the hope that those who seek the truth may find common ground in a common commitment to Christ who is made known to us through God’s truthful Word, the Holy Scripture.

Keep your Bible open as you read these pages so that you can look up the many references that are cited in the text. Reading those verses will clarify much of what is written here, and it will help you evaluate what is written. After all, it is what Scripture says, not anyone else's views and opinions, that finally matters. In every case, the points are made by citing a biblical reference assuming that readers will in fact look up the verse and think about the context and the full meaning of the cited references.

As Baptists have so often confessed: The Bible is a perfect treasure of divine instruction. It reveals the principles by which God judges us, and therefore the Bible is, and will remain until the end of the world, the true center of Christian union.
Available ebook formats: epub
Price: $2.99 USD
Buy Add to Library Give as a Gift
How gifting works
Create Widget
Tags: christianity bible scripture inerrancy biblical inerrancy biblical accuracy hermaneutics
About L. Russ Bush III

L. Russ Bush III (1944 – 2008) entered Southwestern Baptist Theological Seminary in Fort Worth, Texas, in 1968 and received a Master of Divinity in 1970. He continued at SWBTS for his Ph.D. studies, teaching as an Instructor from 1973 to 1975, and graduating with his Doctor of Philosophy in 1975. He continued to teach as an elected faculty member at SWBTS until 1989 when he was called to serve as Dean of the Faculty and Academic Vice-President at Southeastern Baptist Theological Seminary in Wake Forest, North Carolina. He continued in this position at SEBTS until 2006 when he was given the title Dean of Faculty Emeritus and became the first director of the L. Russ Bush Center for Faith and Culture.

You have subscribed to alerts for L. Russ Bush III.

Would you like to favorite L. Russ Bush III?

You have been added to L. Russ Bush III's favorite list.