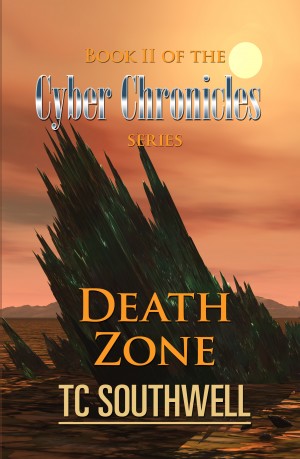 By T C Southwell
Rated 4.92/5 based on 12 reviews
In order to escape Tassin’s enemies, Sabre takes her into the Death Zone, the most perilous place on the planet, a terrifying realm where natural laws hold no sway and life hangs by a thread. Only the deadly abilities he hates so much will keep her safe, forcing him to use them whilst he strives to learn what it is to be human, confused by his forbidden feelings for the high-spirited Queen.

Also in Series: The Cyber Chronicles

An excellent continuation of the two main characters

(reviewed 22 days after purchase)
afrocelttracy reviewed on on July 10, 2012

(reviewed 23 days after purchase)
ronnie primmer reviewed on on March 27, 2012

I have read the entire,the Cyber Chronicles series excellent writer a very good author i recommend the reading of all the books

(reviewed 22 days after purchase)
Vanessa Finaughty reviewed on on Dec. 27, 2011

If you think Book 1 in the Cyber Chronicles series was brilliant, wait until you read Book 2! With each book in the series, it becomes harder to stop reading, particularly since the book is character driven, and the characters are so realistic. Readers will also find a very different Tassin by the end of this book – one who isn’t nearly as selfish and conceited as the Tassin of Book 1 – as with all people, Tassin is changed by her experiences.

In this book, Sabre battles the cyber control unit for domination of his body and mind as they travel through the Death Zone, a fearsome and dangerous place where no man – or machine – is safe. Despite the danger, Sabre’s sense of humour starts to come out, along with a very human personality, giving the reader an insight into the type of person he could be without the brow band controlling his every move.

As in all Southwell’s books, the descriptions are so vivid that I could actually picture myself in the Death Zone, as if watching a movie in my mind. I also loved the way the author reminds the reader that Sabre isn’t as all-powerful as it would seem, and can bleed and die, just like the rest of us, when pitted against a strong enough foe.

I’m not as widely read on fantasy or science fiction as some, but I’ve never read anything, or seen any movie, where science fiction and fantasy are linked the way this author links them, so I have to give this ten stars for originality.

It’s obvious to me that Southwell put a lot of effort into writing Death Zone and that she enjoyed it immensely, making it an unforgettable read that I’d recommend to any sci-fi fantasy lover – and even those who aren’t lovers of the genre.

(reviewed 22 days after purchase)
luke vandervort reviewed on on July 16, 2011

Goog book, can t wait to get the third one!

(reviewed 22 days after purchase)
northeastman reviewed on on July 15, 2011

An Excellent series of Books I am up to VI but will be reading them all.

This a very clever SciFi novel and interweaves a love story between a Cyborg and a Human Queen with some excellent fights and space battles.

Well worth a read

Loved this book, I bought all three in the series as soon as I'd finished the first book and I'll be buying the next one. Clever, well written and very good value.. Recommended to Piers Anthony fans and similar.