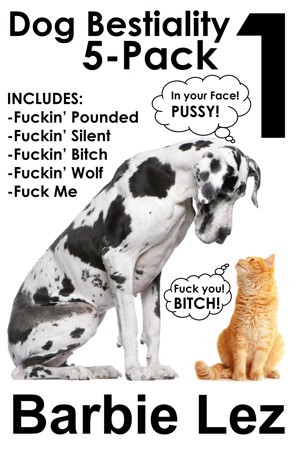 Based in reality with a few fantasy elements, these short stories tell the tale of Barbie Lez—an 18-year-old blonde virgin—as she gets her first taste of dog sex.

Based in reality with a few fantasy elements, these short stories tell the tale of Barbie Lez—an 18-year-old blonde virgin—as she gets her first taste of dog sex.

Fuck Me: Follow Barbie as a wish forces her to switch bodies with an injured dog she found. Can she fight her canine body’s animalistic urges or will she fuck… herself?

Fuckin’ Bitch: Follow Barbie as she learns that her faithful companion—a bitch by the name of Caramel—can speak … and is attracted to her. How will Barbie react?

Fuckin’ Silent: Follow Barbie as a home invasion forces her to hide in the closet with her large dog. Can she remain silent as her canine friend starts licking her pussy?

Fuckin’ Wolf: Follow Barbie as she lets Wolf—her large German Sheppard—show her why dogs are man’s best friend. Can she resist the studly beast’s advances?

My kinky tales remained trapped within my hard drive for years before an article about a self-published author becoming a millionaire convinced me to publish my stories. Within 24h, I had sold 7 copies. That was the start of my new life as a published author. As of this writing, I have sold 15 000+ copies and reached over two million readers worldwide. I have yet to make a full-time income from my passion, but I know it’s only a matter of time.

*Join the Newsletter at TripleErotica.com to get 3 FREE stories from my friends and me. You will also receive updates on new releases, as well as exclusive coupons and deals.

About the Series: Dog Bestiality 5-Pack

You have subscribed to Smashwords Alerts new release notifications for Barbie Lez.

You have been added to Barbie Lez's favorite list.

You can also sign-up to receive email notifications whenever Barbie Lez releases a new book.