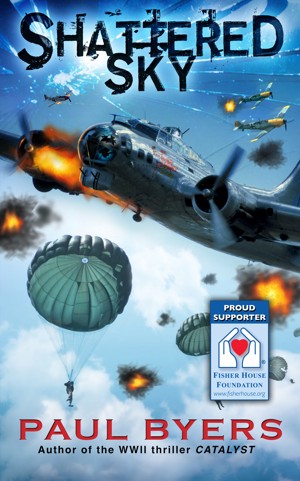 By Paul Byers
The Fisher House Foundation has joined with author Paul Byers to issue a special edition of Byers’ new World War 2 novel, Shattered Sky, as a benefit to the foundation and the men and women of the armed forces they serve.

50% of all sales of the Fisher House edition of the ebook, Shattered Sky will go directly to the foundation to support their programs for the families of America’s service men More
Ten men. One plane. One mission: fly deep into the heart of Nazi Germany, deliver their bombs, and return home safely.

Known respectfully as “The Old Man,” 26-year-old Captain Mike Perry is commanding a B-17 heavy bomber - the legendary Flying Fortress - over the war torn skies of Europe. He and his crew have been together for 18 missions, desperately hoping to survive until mission 25, and their ticket home.

But as each new operation takes the crew of the Red Light Lady deeper into Hitler’s heavily defended Fortress Europe, they can no longer afford to think of the future but must live one day at a time.

On mission 19, the luck of the Red Light Lady runs out. Hit by deadly flak, their flaming ship plummeting to earth from 20,000 feet, they are forced to bail out.

Separated, alone, and uncertain if they're in friendly territory or behind enemy lines, each decision they make on their harrowing journey toward home can mean the difference between freedom or capture… or worse.

Can the streetwise kid from LA stand toe-to-toe with the German Wehrmacht? Can the simple country boy from Louisiana match wits with the ruthless SS Major? Will the “Old Man” be able to bring the remnants of his tattered crew back home?


Paul grew up in Oregon on the shores of the mighty and mysterious Columbia River, and spent endless hours daydreaming on the beach in front of his house, making up stories about the ships from exotic ports all over the world that steamed up the river – what secret cargo might they be carrying; did they harbor spies who were on dark and exciting missions?

Later in adult life, he moved to another mysterious and provocative city – Las Vegas, just outside the famous Nellis Air Force base. After work he would sit on his porch and watch the fighters take off and land, igniting his imagination with visions of secret missions and rich speculation about what could possibly be hidden at Area 51.

After moving back to his native Pacific Northwest, Paul worked for the Navy and took every opportunity he could to speak with veterans from WWII to the Gulf War, listening to them swap stories and relate the experiences of a lifetime.

So it is this combination of a passionate love of history, a vivid “what if” imagination, and a philosophy of life that boils down to the belief that – there are few things if life that a bigger hammer won’t fix – that led Paul to become a writer of exciting, fact-based action-thrillers. His greatest joy is leaving his readers wondering where the facts end and the fiction begins.

You have subscribed to alerts for Paul Byers.

You have been added to Paul Byers's favorite list.

You can also sign-up to receive email notifications whenever Paul Byers releases a new book.