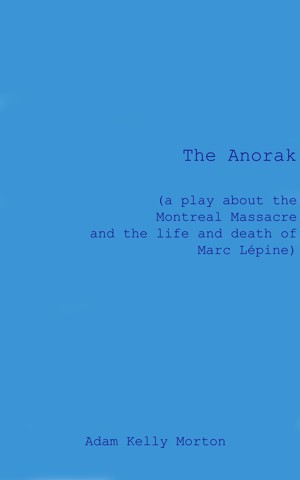 A play about the Montreal Massacre, and the life and death of Marc Lépine.

In this one-man show, the killer speaks to the audience (divided between men and women) over the course of a ninety minute dramatic monologue.

His telling of events leading up to his shooting spree — that left fourteen women dead — is a challenge to our senses, our minds, and our hearts. More
On Wednesday December 6th, 1989, Marc Lépine entered the Université de Montréal's École Polytechnique engineering school armed with a semi-automatic rifle and a hunting knife. He opened fire in what was Canada's first, and bloodiest, school shooting. The death toll, of fourteen women, remains an infamous legacy the world over.

"The Anorak" is a ninety-minute dramatic monologue told from the point-of-view of the perpetrator himself. Addressing the audience, who have been divided in advance between men and women, he recounts the events of his life which have led him to first take the lives of innocent women, and then his own.

Adam Kelly Morton was born and raised in Montreal, where he now lives. His other written works include the plays Periostracum, Alan's Search for the Best Girl in Montreal and The Succubus, several articles for Canadian online magazines, and the novel In the Soft. As an actor, his final performance of The Anorak took place, in French, at Université de Montréal for the 20th anniversary of the Montreal Massacre. He has also acted in numerous other plays, on film and television, and in sketch comedy. Currently, he is the creative head of Ack, No Ledge Films where, as a writer/director, he has released two short films (Communication Policy and Foreign Language) and the feature film Bridges Over Montreal. He teaches acting, writing, and film production at I.O. Acting Studio in Montreal.

CBC Documentary on "The Anorak"
The Canadian Broadcasting Corporation radio doc on "The Anorak". Host Anna-Maria Tremonti presents Fiona Downey's documentary on Adam Kelly Morton's performance of his play about the Montreal Massacre and the life and death of Marc Lépine. With the collaboration of Sylvie Haviernick (sister of Maud, one of the 14 women killed) the documentary unearths a disturbing piece about a most heinous act.

You have subscribed to alerts for Adam Kelly Morton.

You have been added to Adam Kelly Morton's favorite list.

You can also sign-up to receive email notifications whenever Adam Kelly Morton releases a new book.