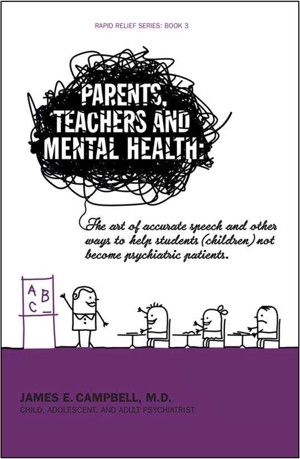 By James E. Campbell, M.D.
In this, the third book in Dr. Campbell’s Rapid Relief Series, the psychiatrist lays out, step-by-step, the art of accurate speech and other ways to help students (children) not become psychiatric patients. More
Anyone who teaches others, including parents, can benefit from reading this book. Teachers play a pivotal roll in the education of children and adults. There are basic principles of living that could be taught in the classroom that would not take much time from teachers; in fact, I expect that because these concepts will reduce conflict in the school environment, it very well might give the teachers more time to teach. This book is not about what teachers should teach, but about how the way teachers teach can make major differences in their student's lives.
In my practice of psychiatry (child, adolescent, and adult) I find on a daily basis that I have to teach children and parents things they should have been learning from about the age of five. Because they are not getting that information they make mistakes in addressing the problems of life that they likely would not have made if they had a little more information.
It has always been my point of view that a lot of people's problems are related to not knowing how to get a different, or better, outcome from the one they are experiencing. I look first at what is missing in their approach to the problems they are having rather than seeing the problem as a psychiatric diagnosis. Unfortunately, to have insurance pay for the visits a doctor must frame the issue in a way the insurance entity will accept. In my experience, people, when given a few ideas or concepts related to the problems they are having, will then go forth and solve the problems.
This book is about the type of things that teachers can do in the process of their teaching to help individuals not create psychiatric problems for themselves. After all, if we don't create a problem, then we do not have to solve the problem; that translates into a conservation of energy on all fronts.
Available ebook formats: epub mobi pdf rtf lrf pdb txt html
First 20% Sample: epub mobi (Kindle) lrf more Online Reader
pdb
Price: $4.99 USD
Buy Add to Library Give as a Gift
How gifting works
Create Widget
Tags: teachers selfhelp mental health parents counseling psychiatry speech
About James E. Campbell, M.D.

James E. Campbell, M. D. was born in farm country in Middle Western Illinois. He graduated co-valedictorian from Warsaw High School. He then went to MacMurray College in Jacksonville , IL. for three years before being accepted to University of Iowa, University of IL. and St. Louis University Medical schools. He chose to go to St. Louis University, and then to Michael Reese in Chicago for his basic three year adult psychiatric residency training.

In 1971, after two years in the Air Force, he set up private practice in Phoenix, Arizona. Because of the rapid turnover of patients in his office, an outcome of the use of rapid relief principles, he decided to extend the nature of his practice by taking a two-year child fellowship at UCLA. It was here that he met Dr. Gary Emery who he later collaborated with to write the original Rapid Relief from Emotional Distress.

Web site: http://www.rapidreliefseries.com
Call 602-439-2400 to find out if Dr. Campbell is available for an appointment; also, to order print editions of his books.

You have subscribed to alerts for James E. Campbell, M.D..

Would you like to favorite James E. Campbell, M.D.?

You have been added to James E. Campbell, M.D.'s favorite list.