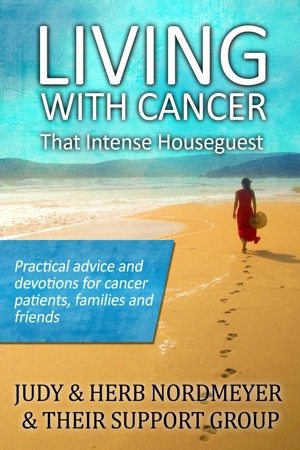 Living with Cancer - That Intense Houseguest

Herb Nordmeyer is a forensic stucco consultant and an accomplished storyteller of stories that tug at your heart-strings. His specialties are problem solving and life lessons.

Coming to Texas
In November of 1941, as war raged in Europe and the Japanese secretly prepared to attack Pearl Harbor, a decision was made to dispatch Herb to Texas, even though he was not fluent in English. We will leave Herb’s wartime activities to your imagination. It is enough to know that he survived the war. By 1947 Herb spoke passable English, and he was actively pursuing his dream of becoming a test pilot for a prototype aircraft. That career came to a sudden halt on June 23 of the same year. The complete story of Herb’s days as a test pilot will soon be available in the children’s e-book, The Last Flight of the X-SP-13-5-D.

When people correct Herb's English, he can truthfully say, "You have to give me a little slack, I did not speak any English when I came to Texas."

Corporate America
Herb’s career continued to take unexpected paths. After spending some time teaching in a school where armed guards patrolled the halls, Herb decided to pursue less stressful employment. He went to work for a construction materials company. During his years in corporate America, Herb held a number of titles and published numerous technical articles, but he never displayed a degree higher than his eighth grade diploma on his office wall. This allowed him to talk as equals with people whose greatest business asset was their ten-year-old pick-up truck. While Herb’s experiences in the corporate world would easily rival the comic strip “Dilbert,” writing about them is not high on his priority list.

Retirement
Since retiring from corporate America, Herb has divided his time between consulting, leading wilderness kayaking tours, and writing serious books with a sense of humor. Since August, 2013, he has spent a great deal of time in Jubilee, one of the worst slums in Haiti, where everyone calls him Papa (Creole for Grandpa). Pastor Benoit, president of the Lutheran Church of Haiti, challenged Herb to find or develop technology to build disaster-resistant homes for the residents of Jubilee for a material cost of $1,000 US. Herb failed. The material cost is $2,800 US. He is now teaching the residents of that slum to build their own homes and writing Kay pou Jubilee (Homes for Jubilee), an instruction book for building these homes.

Devotions & Cancer
Herb began writing devotions for a church publication in 1996. Additionally, Herb and his wife, Judy, have published two booklets related to living with cancer. Those booklets are titled We Heard the Wings of Angels and Cancer—An Intense House Guest, and are now available from Smashwords as a single e-book.

The Stucco Book
In 2012, Herb published The Stucco Book—The Basics. This book contains everything you need to know to complete a conventional stucco job, whether you are a novice or a seasoned professional. A second volume in this series, The Stucco Book—Forensics & Repairs, will be published in 2016.

Animals I Have Hated
Herb also published Animals I Have Hated in 2012. This is a book of true animal stories interwoven with life lessons. Some of the stories were first told by Herb’s mother, and others feature lessons Herb learned on his own from the animals he encountered. The book’s title also comes from Herb’s mother. She said that if she ever wrote her stories down, that is the title she would use. Animals I Have Hated. Some day, it will be available as an e-book. The hang-up, Herb’s granddaughters insist that he use an alternate title.

Consulting
When he’s not writing, Herb keeps busy consulting on stucco projects. He is especially in demand when problems develop on a job site and when an expert witness is needed.

A Little More about Herb
Herb, Judy, and their two cats live in a wheelchair-accessible home near San Antonio, Texas. They claim that they keep their chickens outside. Herb and Judy built their home with the help of volunteers who wanted to learn about the building concepts Herb has developed. And there is a great deal to learn. Herb and Judy accomplish most of the heating and cooling of their spacious, energy-efficient home with a single twenty-inch box fan.
As a final note, it is helpful to recognize that when Herb writes, he always tells the truth, but sometimes he allows the clarifying details to emerge slowly. For example, Herb’s dispatch to Texas was in fact his birth in November 1941, and his brief career as a test pilot took place at a very young age. (You will have to wait for the book to find out the details of his last flight.)

Herb has been told that a writer’s biography should never be boring.

Reviews of Living with Cancer - That Intense Houseguest by Herb Nordmeyer

You have subscribed to Smashwords Alerts new release notifications for Herb Nordmeyer.

You have been added to Herb Nordmeyer's favorite list.

You can also sign-up to receive email notifications whenever Herb Nordmeyer releases a new book.