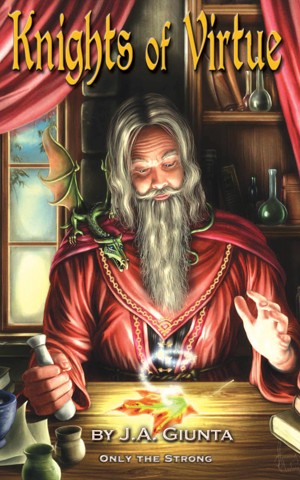 Only The Strong (The Knights of Virtue Part IV)

By J.A. Giunta
Stephany explores her own virtue and reads of a deepening mystery. This is story 4 of The Guardians Series.

The tale of the Esrald family begins when patriarch Samuel, and the last Guardian of the Recipe, passes his obligation to his six children.
A collection of tales following the events of a family that shape a kingdom, The Guardians series is a continuing look into the lives of true heroes. More
Stephany explores her own virtue and reads of a deepening mystery. This is story 4 of The Guardians Series.

A collection of tales following the events of a family that shape a kingdom, The Guardians series is a continuing look into the lives of true heroes. The Recipe, inherited instructions to a secret magic, is passed on and protected by each generation of Guardians. Guided by inner strength and the abilities invested through Essence magic, the Knights of Virtue struggle to maintain a fragile balance. Samuel Esrald decides the time to pass on the Recipe has come and calls together his six children to tell the tale of how it all began: While Magarius pursues his experiments to unleash the power of Essence, the Esrald brothers seek to fulfill their father’s dream of creating the one cookie that will satisfy their King. When the two endeavors are thrown together by a mischievous Faerie Dragon named Flicker, the result is a series of mishap, adventure, and the Recipe. The virtues idealized by each of the brothers are Truth, Courage, Honor, Strength, Valor, and Humility. As Essence magic amplifies the core of a person’s being, what if one whose purpose is not so pure should ever be affected? Realizing this, the brothers swear the Oath of Virtue, a promise to keep others from harm by safeguarding the magic. With their ancestral story told, the new Knights of Virtue take the Oath as well. And the waking of old powers begins…

J.A. Giunta was born in Brooklyn, New York, in November of 1969. Though he spent most of his childhood growing up on Long Island, he has been living in Arizona for more than twenty-five years.

Joe started writing stories at an early age, creating adventures for his pen and paper Dungeons & Dragons campaigns on a Commodore 64. Spooled from a dot-matrix printer, that first stapled manuscript has not survived, but it has evolved over the years to form The Ascension trilogy.

His first Fantasy novel, The Last Incarnation, was published in February of 2005. With a Bachelor of Arts degree in English from Arizona State University, he is both an avid reader and gamer. He currently writes full-time.

He currently lives with his wife, Lori, and six-year old daughter, Ada Rose, in the perpetual summer that is central Arizona. He credits all of his work to the advent of air-conditioning.

Also in Series: Knights of Virtue

You have subscribed to alerts for J.A. Giunta.

You have been added to J.A. Giunta's favorite list.

You can also sign-up to receive email notifications whenever J.A. Giunta releases a new book.