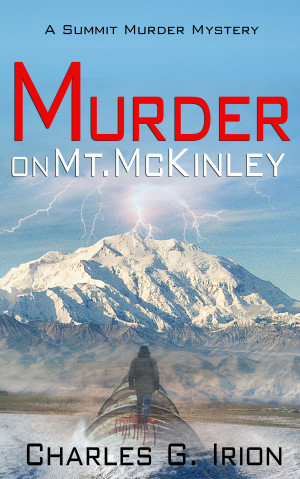 Charles G. Irion is a publisher, best-selling and award-winning author, successful entrepreneur, adventurer, philanthropist, executive producer, and actor. For several decades, he has served as the sole proprietor and broker for U.S. Park Investments, a leading operator of Manufactured Home and RV communities in the United States. Before that, he was a pharmaceutical representative for Johnson and Johnson, McNeil Laboratories after completing his Masters of Business Administration in International Marketing and Finance from the Thunderbird School of Global Management.

One of his life-long passions is for the written word. Determined to make his dreams a reality, he wrote and published fourteen books comprised of the Summit Murder Mystery series, and the Hell series. Inspired by his 1987 attempt to climb Mt. Everest, and a 2011 summit of Mt. Kilimanjaro, each book in the Summit Murder Mystery series is set atop the highest point of the world's seven continents. Deaths from falls, avalanches, illness, heart attacks, and high altitude sickness are a matter of course, and when you add in murder, action and adventure, the combination makes for unforgettable reads. The climb begins with the first book in the series, Murder on Everest, and is followed with
WIKI ARTICLE

Murder on Elbrus, Murder on Mt. McKinley, Murder on Puncak Jaya, Murder on Aconcagua, Murder on Vinson Massif, and ends with Murder on Kilimanjaro. There is also a novella, Abandoned on Everest. The Hell Series includes, Remodeling Hell, Autograph Hell, Car Dealer Hell, and Divorce Hell. He also published a fun novelty cookbook for outdoorsmen called, Roadkill Cooking for Campers - "The Best Dang Wild Game Cookbook in the World."

Many years ago, Irion's first medical mission was to Benjamin Hill Senora, Mexico with the Phil Am Lion's Club. Even then, he knew that medical missions were experiences he wanted to continue. Charles is currently a Director of the Phil-Am Lions Club in Phoenix, Arizona and has participated in medical missions in a village near Subic Bay, Philippines and in Caborca, Mexico to provide approximately 300 free cataract surgeries to needy patients. He also traveled to the Municiple Hospital in San Pablo City, Laguna Philippines with the 3000 Club, to administer eye and diabetic screenings for those in need.

In June 2011, Irion went on a trip to Mt. Kilimanjaro with the K2 Adventures Foundation. They took Project C.U.R.E. supplies and used them to examine more than 200 patients. The following year, he visited Lima, Peru to help translate for the doctors and nurses at a C.U.R.E. clinic for a day. In addition to philanthropy trips and translating services, Charles participated in the training session at the Denver headquarters to become a certified Needs Assessment Representative. He went to Burkina Faso, Africa for the field training requirement and his first assessment alone was in Cuenca, Ecuador to conduct assessments on a hospital and a mobile surgical unit. His next assessment trip to Nicaragua included assessments of Project C.U.R.E. Clinics, where he translated for the doctors and passed out medicines and vitamins to children and adults. Since then, he has also conducted needs assessments to Ouanaminthe, Haiti; El Banco,Colombia; Santa Marta, Colombia; Buenaventura, Colombia; Cali, Colombia; Boma, DRC; Lumbumbashi, DRC; Kalemie, DRC; Lima, Peru; Machu Picchu, Peru; Bahia Kino, Mexico; Nogales, Mexico; Benjamin Hill, Sonora Mexico; Santa Cruz, Bolivia; Belize City, Belize; Cuba; Antigua, Guatemala City, Guatemala; San Jose, Costa Rica; Jaco, Costa Rica; Panama City, Panama; Zambia, Zaire, DRC; Addis Ababa, Ethiopia; Moshi, Tanzania; Manilia, Philippines; Zambales, Philippines; San Pablo, Philippines; Kenya, and Mumbai, India. He loves being involved with such an amazing organization and helping those that really need it. In that spirit, his slogan is One World, One People™

Irion's passion for adventure has encompassed the full gamut. He has traveled to over 60 countries throughout the world. SCUBA diving is a favorite hobby of Irion's and he has seen the underwater world from California to Mexico, Costa Rica, the South China sea, Belize, Colombia, Rio De Janeiro, the island of Phuket in Thailand, Bali, and in Subic Bay of the Philippines. Irion has also skydived throughout Arizona, loved the thrill of white water rafting on Pacuare River in Costa Rica, and in 1988, Irion completed a week long course in High Wall Mountain Repelling conducted in the Bavarian Alps.

Irion and Watkins continue to mesmerize with the continuation of the Summit Murder Mystery series, Murder on Mt. McKinley. Scott Devlon finds himself on yet another climb with a few old friends and several new dangerous characters. The controversy of building another pipeline in Alaska has the attention of Russians trying to find a way to
cash in, while Native Americans and Environmentalists are concerned about the preservation the native lands. A lot to contend with, for the major Oil Companies and mountaineers hoping for an uneventful scenic climb to summit Mr. McKinley. As I’ve learned a lot about the dangers involved in mountaineering in the previous books in this series, there always seems to be yet one more obstacle. Sometimes that can be dangerous agendas and other times Mother Nature has a hand. This is another extraordinary journey, sit back and enjoy the beauty of Alaska and the murder and mayhem that always seem to follow Scott Devlon.

You have subscribed to alerts for Charles G. Irion.

You have been added to Charles G. Irion's favorite list.

You can also sign-up to receive email notifications whenever Charles G. Irion releases a new book.