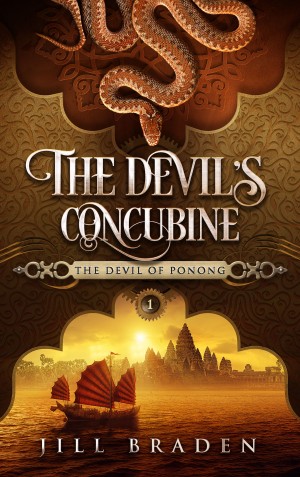 The Devil's Concubine (The Devil of Ponong series #1)

Upon completing her studies at Miss Havisham's School for Girls, Ms Braden earned a degree in Finance. Armed with a smattering of monetary theory and an understanding of capital markets, she invaded Los Angeles with such stealth that most of the population remains unaware that she lurks within the borders. While her lifelong dream of owning James West's train remains elusive, the underwater lair is coming along quite nicely, thank you. Do drop in. She's been looking for an excuse to test the hound's SCUBA gear.

Also in Series: The Devil of Ponong

Not sure whether to call this sci-fi, fantasy, paranormal or what. It's an interesting world where there are many races of humans, all derived from a common ancestor it seems, but many of the races can transform into other creatures like wereworlves and sea dragons. Some have venomous fangs but otherwise look normal. They appear to be able to interbreed, or at least they can mate with each other because the 'Devil' is a werewolf and his concubine is one with venomous fangs. The setting is lavishly well done with thick and consistent atmosphere. It's an impoverished pastoral island reminiscent of the far east in the early 20th century. The highest technology is a teletype; firearms and engines are barely known. There is both Earth native and alien life. If it was truly sci-fi, this would be a planet long after the collapse of the empire that had recovered from a long dark age, but it really doesn't seem to have the history for that.

The devil is a drug lord holding the island's underclass in an iron grip. The island is ruled by a colonial power, and another race is trying to infiltrate. The plot is the devil's concubine trying to figure out what the infiltrators are up to while trying to prevent the colonial power and the drug lord from doing more damage to her people. It's relatively convoluted and moves fast enough to keep the average person's interest. There are quite a few murders and a battle scene near the end so the violence level is moderate and some of it is gruesome but if this was a movie it would not be violent enough to be shown in multiplex theaters. There is also too much feeling for the victims for Hollywood. There was an incident in the concubine's past where she killed many werewolves that were massacring her people and she finds out later that she may not have killed the right ones but may have been manipulated by the drug lord to kill his enemies which causes her great regret.

The proofreading is excellent, I was on pg 119 before I noticed a missing word. I wasn't conscious of any other errors. That's better than most professionally published works today. There is some sex in the story but it's not explicit enough to make it unsuitable for young people. The book could have been a four star except that at one point she used a plot device that I consider cheating. With no prior notice, one of the people turns to a sea dragon to save the day. If we knew in advance he could do that it wouldn't look like she just made it up on the spot to get out of a jam. There are two others in the series (so far) and a preview of the second which seems like a continuation of the first. Since they are not free, I won't review them, but if you like this one they will probably be worth it.

Fascinating, a totally unique new voice. Qui'Tai, is the 'Devil's Concubine', a position she owes as favor to the devil for giving her vital information when she needed it to take revenge for a horrific family tragedy.
Fantastic world building seduces the reader into a magical, wonderfully wrought environment, part Asian, part ancient, part steampunk, part European. The thought and imagination necessary to conjure such magnificence is almost mind-boggling, it is utterly beautiful, original and fan-worthy.
Qui'Tai, is a snake-shifter, and lover to the most important, Alpha-Male, werewolf on the island she inhabits. She is also far more intelligent than him, and runs his criminal-drug-distribution-ring with skill and cunning. She is the female lead every would-be-famous movie director has ever visualized. Also, she sees the future with the aid of the Oracle who is the goddess of her people the Ponongese. Culture, protocol and tradition are so carefully structured, that even a greeting, akin to 'How are you", is reproduced.('have you eaten today, auntie?').
Only in our 'economically challenged publisher decade' would we find an author of this calibre, Indie: in any other time she would be touted as the 'New Tolkien', the book as the 'New Narnia'. However, even those books do not do what this one does. Here, we find a truly modern woman, a woman every young girl can, and will want to identify with... A woman who is the master of her own destiny, but can still love, lust and live under a cloud of mixed emotions so 'Today' in their complexity.
In addition, we find our dream of who we would like to be in this novel, but that is not its only trump-card. No, there is mystery, suspense, action, terror, deep emotion, and a world-altering-love story at its core. The protagonists, (from Pertof, The Devil, to Kyam, the arrogant, intelligent, off-limits Thampurian), are so sharply layered that you'll find yourself saying 'Oh, yeah, I know someone just like that even if they're not a Sea-Dragon'. Yes, Qui'Tai, the snake, loves a Sea-Dragon, soooo WOW...
Qui'Tai, has been betrayed, jilted and led astray. Nevertheless, her intelligence, savvy, and un-utterable style, set her apart from your average bad-ass, ruthless female protagonist, Qui'Tai has a conscience, and she loves and wants to save her enslaved people: The Ponongese are colonized by the Thampurians, creating political intrigue as a backdrop for the steamy, deliciously, slow-burning romance between, Qui'Tai, the lowly Ponongese, and Kyam Zul, the 'high-born' under-cover colonel, Thampurian.
The plot develops a spectacular suspense between three nations, all of whom are hell-bent on seizing control-- the Thampurians, Ponongese and the Ravidians.
Imagine if your enemy had discovered a weapon as powerful as the A-bomb, and you had only a bow-and-arrow to defend yourself with, then imagine a heroine who can come up with a conquering plan. All this set in a land of lush forests, overlooking azure or emerald seas, balanced under a moody sky which alternately blushes orange, pink, lilac or Monsoon-gray--a breathtaking vista, lusciously constructed by sparkling prose, which is almost poetically perfect.
This is so much more than 'average' that you will want to devour the series in one sitting. Bravo! Jill Braden.

I received a free copy of this book in exchange for an honest review. Thank you to the author for her generosity.

A great read set in a place not many would think to use. I was a tad hesitant at first about the book, but the first few pages sucked me in. The heroine is feisty, intelligent, and crafty. While she is described as being a concubine, the love/sex angle is downplayed. It’s refreshing for an author to not make it one of the main themes.

The tropical/jungle setting, along with the addition of sea dragons and snake people, gives an added bonus. The heroine, Qui Tai, has many layers which are slowly revealed over the course of the story. The descriptions of the world and the people who inhabit it made me feel as if I was there along side them.

I am looking forward to reading the second book in the series.

You have subscribed to Smashwords Alerts new release notifications for Jill Braden.

You have been added to Jill Braden's favorite list.

You can also sign-up to receive email notifications whenever Jill Braden releases a new book.