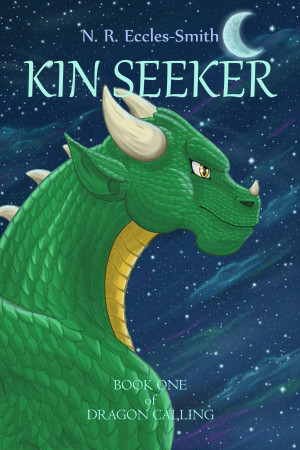 By N. R. Eccles-Smith
Rated 5.00/5 based on 2 reviews
When Laeka’Draeon learns he is the last dragon left after the mysterious disappearance of his kin, he begins the daunting quest to find them, knowing their prolonged absence could ultimately destroy the balance of peace in the world. More
The dragons have mysteriously vanished from the lands of Valadae––except one.
With no memory of his past, or what happened to his kin, Laeka’Draeon begins the daunting quest for answers, well aware the stakes are more than personal.
If the dragons fail to return and restore the waning magic of the legendary towers of Klonnoth Aire, the consequences could bring about the return of an ancient and devastating enemy.
The peace of the eleven kingdoms hangs in the balance, and only Laeka’Draeon can set things right.

Naomi confesses the best word to describe her is: whimsical. Forget “the girl next door” and think more along the lines of “the girl from the next galaxy over” and you’d be closer to the correct personality categorization. She is an unequivocal day-dreamer, anime enthusiast, partisan of fantastical things, and unshakable devotee to story-telling.

When not immersed in her written and illustrative projects, Naomi can be found wandering the worlds created by others, either between the pages of a book or across the sweeping digital scapes of console games. Part geek, part monster-slayer, with a heart for the pure and the wondrous, Naomi endeavours to remind people that a little bit of beautiful strangeness is a good thing to have in this crazy world.

Currently, she lives on the Gold Coast, Australia, with an assortment of cats and family members.

About the Series: Dragon Calling

Dragon Calling is a five-part fantasy/ adventure series set in the fictional world of Valadae, and follows the story of a young dragon named Laeka’Draeon on his quest to find the others of his kind.

Loved this book! What an amazing story of friendship filled with adventure, suspense and had me laughing again and again. Such colourful characters, intriguing events and inspiring themes had me wanting more. I’m looking forward to the next in the series and would recommend this to young and old alike!

I was very much anticipating the release of this book and I am pleased to say I was not disappointed. The plot line was exciting, the hero's journey one I felt I wanted to be involved in, and the characters colourful but realistic through all situations in which they found themselves.

I often didn't know what to expect. In many stories, sections of ‘walking and chatting’ are often followed by more ‘walking and chatting’. Not so in Kin Seeker. There were never any ‘boring’ bits, but excitement and plot shifts weren't added simply for interest's sake. Every challenge gave a bit more understanding of the history and present situation of the world, and a little additional insight into the hearts of the characters that were forced into dealing with them.

This brings me to the characters themselves. Each character had its own distinct personality, which was discernible within moments of meeting them. Character interaction was also genuine, with friendship and enmity quickly becoming apparent when personalities met and sometimes clashed. Characters would do and say certain things because it was within their nature, not because the author forced them into doing so.

Overall, I found this book both enjoyable and compelling. The story itself was uplifting and the situations challenging, keeping me wanting more. I’m definitely looking forward to the next book in the series.

You have subscribed to alerts for N. R. Eccles-Smith.

You have been added to N. R. Eccles-Smith's favorite list.

You can also sign-up to receive email notifications whenever N. R. Eccles-Smith releases a new book.