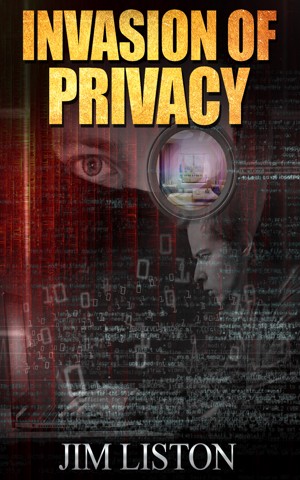 By Jim Liston
Rated 4.75/5 based on 8 reviews
If you're the person who murdered my wife and think you've gotten away with it, think again. I'm looking for you, and I'll eventually find you.

Is someone watching you through your webcam right now? No? Are you sure? Jim and his team of computer hackers are searching for a killer. They know they're invading your privacy and it's illegal, but they don't care. More
If you're the person who murdered my wife and think you've gotten away with it, think again. I'm looking for you, and I'll eventually find you.

Is someone watching you through your webcam right now? No? Are you sure? Jim and his team of computer hackers are searching for a killer. They know they're invading your privacy and it's illegal, but they don't care. If you've got nothing to hide don't worry, they'll move on soon enough. Unless you're doing something that interests them. Then they might come to your house to have a talk with you.

Reviewed by Jack Magnus for Readers' Favorite
This remarkable collection of tales and vignettes grab you and don't let go until the end. Some are reminiscent of Rod Serling's Twilight Zone; a mix of horror, fantasy and the absurd. Others, like Invasion of Privacy, are engrossing adventures spiced with a bit of mystery. They all share a few attributes: amazing characters whom you quickly come to know and care about, and story-lines that catch you up in the action with the first few words. Jim Liston's stories are great reading and highly entertaining.
Download: epub mobi (Kindle) pdf more Online Reader
rtf lrf pdb txt
Price: Free! USD
Add to Library
Create Widget
Tags: short fiction murder short stories thriller mystery mystery suspense adventure story mystery action murder adventure
About Jim Liston

Jim Liston grew up in the wild 70s in St. Louis, Missouri. A musician all of his life, he spent most of his early adult years traveling as a drummer in rock bands. He currently plays the mandolin and is part of a bluegrass duo with his wife.

He has been writing short stories and flash fiction on his blog, JimsGotWeb.com, and the positive feedback has encouraged him to publish his first book, "Invasion of Privacy and Other Short Stories." He is currently working on his next book, which will be published in December 2013.

Murder mystery stories are a dime a dozen and usually fall flat, especially when written in First Person, but the titular story “Invasion of Privacy” manages to create a sense of mystery and introduces a novel scenario. These being shorts I cannot go too far into detail without spoiling the meat of the stories but I will say that the concept behind “The Tourist Attraction” is the most unique of the stories presented and I enjoyed its concept the most. The three best stories are: “The Tourist Attraction”, “A Novel Murder”, and “Tag, you’re it”. I want to give a nod to the formatting and grammar, they are both great (which is rare).

Short story collections have become relatively rare these days—almost the only ones that make them are the already famous ones—Neil Gaiman, Stephen King, George Martin. But sometimes you encounter a writer so gutsy that he throws all caution to the wind and goes ahead with what he does best. One such writer is Jim Liston, whose book, ‘Invasion of Privacy and Other Short Stories’ consists of strange, dark, compellingly intriguing stories you will want to consume in one sitting.

The title story, of course, is a dark, but ultimately satisfying tale called “Invasion of Privacy.” Jim Gotweb, a computer programmer who runs a small computer shop, is on the war path: his wife was stabbed to death during a robbery, and the only clue he’s got is the distinctive spider tattoo on the killer’s face. But that doesn’t stop him from going over the top to find his wife’s killer—a computer coder, he creates a program that allows him to track a growing network of webcams throughout the city in the hopes of finding his target and exacting revenge. As it turns out, what he wants is not so simple, and soon, he meets other characters who join him on his “mission:” Roger, a teenaged geek, and the bombshell named Melanie, who seems like Irene Adler to Jim’s Sherlock.

The other stories in the collection are a heady mix of the macabre, the absurd, the horrific—they somehow remind you of the 1960s-era ‘The Twilight Zone’ or the more bizarre episodes of the Ray Bradbury Theater’. Some of the stories serve like “breathers”—clever, thoughtful intermissions to the more intense stories. But I admit, I love the title story ‘Invasion of Privacy’ the most—it drips with a sense of adventure, and the suspenseful cliffhangers are chilling enough to leave you panting for more. Melanie—with her sex appeal and the fact that she’s also smart and sassy—is a great complement to the Jim and Roger geek duo. And because they can remotely watch a seemingly unlimited number of households through their webcams, the possibility for many more sequels is endless—I’m thinking a TV series based on this story would be great.

Overall, I love the book. But I would love it more if it were longer, or if it were a full novel. I’m hoping Liston writes more, and soon. Highly recommended!

The author is very talented and eloquent. I thought that every story was just as good as the last and they are all each and unique in their own special way. Each plot is captivating with twists and turns that I never saw coming and the characters are really dynamic and definitely well-thought out. I highly recommend this read if you're looking for something refreshingly new, I will definitely be looking out for future releases by the author

First off a comment to James Jenkins above me- People only write reviews when they really like something or really dislike something. For this author to have several 5 star reviews just goes to show that he has written an amazing piece of art. For you to come on his review page and leave a 1 star review because you are jealous that he has good reviews is just catty and immature.

Invasion of Privacy is an amazing read. As the title suggests, there are several stories within the book. My favorite is Invasion of Privacy itself. A man witnesses his wife Diane get murdered and after attempting to get the police to help him find the killer, decides to take matters into his own hands. His uses his technologically advanced mind to create a software that allows him to see people through their web cameras. This story literally has you on the edge of your seat. You wan't so badly for this loving husband who had his wife die in his arms, to find the man who did it.

My second favorite story in the book was Tag, You're it! This story is only two pages long but super interesting. The ending was completely unexpected. Definitely a good quick read.

Overall, I thoroughly enjoyed this book. First of all, it is free so what is there to argue about that? Second of all, the book had perfect grammar and was well edited. As someone who is a major grammar freak, I was able to relax and read through the book without over-analyzing all the errors I could find. Overall, a quick well written book of stories that will keep you intrigued.

I really enjoyed this book. I LOVED the title! I like the beauty and beast stories so this will be a keeper for me.

(reviewed the day of purchase)
Andrew Woodfield reviewed on Aug. 10, 2013

(reviewed the day of purchase)
tatiana suarez reviewed on Aug. 10, 2013

(reviewed the day of purchase)
Miriam Slozberg reviewed on Aug. 10, 2013

This was a compelling book, and I definitely did not want to stop reading this until the very end. Very chilling in some parts, and very well written.

You have subscribed to Smashwords Alerts new release notifications for Jim Liston.

You have been added to Jim Liston's favorite list.

You can also sign-up to receive email notifications whenever Jim Liston releases a new book.