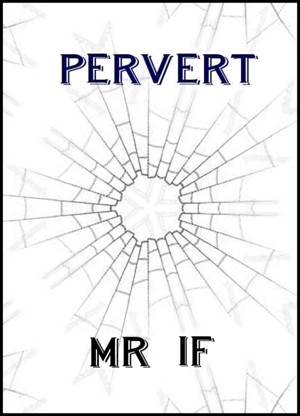 By Mr If
Adult

Rated 4.00/5 based on 2 reviews
In the third part of Mr If’s Entertainment Trilogy, the legendary author’s tales of sexual excess are drawn to an extraordinary conclusion.

Skint, rejected and desperate, our pseudonymous protagonist embarks on a trek across small-town England, on what turns out to be a tough mission to cure his “adultery addiction”.
Download: epub mobi (Kindle) pdf more Online Reader
lrf pdb
Price: Free! USD
Add to Library
Create Widget
Tags: sex identity confessional mr if
About Mr If

Mr If has submitted the following biographical note: "Everything you need to know about Mr If is contained in his writing. All other biographical information is irrelevant."

Learn more about Mr If

Reviews of Pervert by Mr If

I haven't thoroughly examined his other books but I've given Pervert a good read. It's crude, angry and unlike anything I've ever seen. It also feels mixed up and back-to-front. The narrator comes across as deeply conflicted. He berates the reader on several occasions, yet seems to be seeking our understanding. He hates marriage yet seems to envy monogomous relationships. He's both proud of his life of serial adultery, yet also disgusted by it.

The narrator starts off by telling us this is a true story, and for a "confessional" story to work it needs to feel authentic. Problem is, the more I read the less credible it felt. One thing it lacked was a real exploration of the emotions of any of the characters. For example the narrator walks in to find Agnes (who he claims to be in love with) having sex with another man. She then tells him to "fuck off". I imagine this would evoke some kind of emotional distress but if there is any he certainly doesn't share it with the reader. And no matter how hard I try I just can't really accept that a married person would chose to have sex with someone they don't know. It seems to me they would have to establish some kind of trust first to ensure this guy isn't going to tell their partner or otherwise ruin their lives.

I also think it would seem more honest if the narrator was rejected on one or more occasions. At one point he admits that a lot of people do knock him back, but these stories are conspicuously absent. I imagine they could be quite funny. This story would be stronger if it was fleshed out with a bit more detail.

And finally - the ending wasn't that great. It was a little abrupt and too gratuitous in comparison with the rest of the book.

I've been a tad more critical here than I thought I would be (sorry about that). Overall I found this worthwhile - it's a lot more interesting than most stuff out there. Definitely worth a look.

If you can get past your totally understandable abhorance toward Mr If's outrageous behavior, it just might dawn on you that he's a pretty darn good writer, and also one of the most compellingly unique characters ever rendered in words. "Entertainment," "Violence is the Answer," and "Pervert" together form a 70-page unified trilogy that feels like a complete work. Good stuff if you can get past the aforementioned disgust factor.

You have subscribed to alerts for Mr If.

You have been added to Mr If's favorite list.

You can also sign-up to receive email notifications whenever Mr If releases a new book.