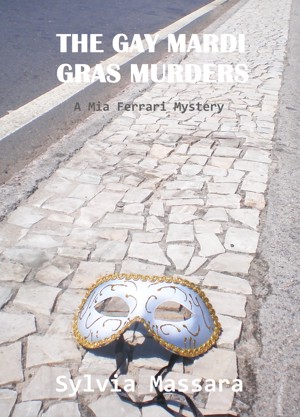 A female impersonator is found dead in her hotel suite bathtub, and a rare diamond worth twenty million dollars is gone. The Gay Mardi Gras is fast approaching and Mia Ferrari, senior duty manager of the exclusive Rourke International Hotel Sydney, has to juggle a bunch of drag queens, a number of fabulously handsome gay men, a transsexual with a dark mystery, a young cop with sex on his mind, a close friend from the UK who is having marital problems and a mounting body count. 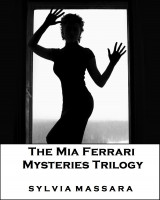 I have been fortunate enough to read all of Sylvia Massara's books and enjoyed them all for different reasons. We first meet Mia Ferrari in Playing With the Bad Boys when she solves a murder which was made to look like a suicide.
Mia Ferrari is one of those gutsy female characters that you wish, as a writer, you had invented, and as a reader, you had as a friend. She is strong, opinionated and unafraid of anything that life throws at her. This is one ballsy chick.
In the Gay Mardi Gras Murders, Mia has her work cut out when a particularly gruesome murder is committed at the hotel while she is duty manager. She does what any wannabe detective does and sets out to uncover the murderer. Even though she is warned off the case, has to juggle her day to day work, look after a friend from the UK who has personal issues, and try not to murder the difficult Phil Smythe, the man she hates most in the world.
The situation is further complicated when more horrific murders occur. Nothing fazes Mia, who is determined to get to the bottom of the mystery particularly, when she is befriended by a group of delightful and amusing "queens" and learns of the disappearance of a large jewel.
What I particularly like about Sylvia's novels, her ability to write about emotions, not just love. Mia has had some major knockbacks in her life and is not some soppy girl. She hates her ex-husband but can deal with the mess he has left behind. She gets angry and isn't afraid to show it. She is a grown woman who likes men, particularly bad boys, even though she knows she shouldn't, and she enjoys sex. She isn't seeking a happy ever after solution. So what the reader gets, is a well-rounded, well balanced character, one who convinces us all that friendships are by far the greatest gift you can have, and that they can be even stronger than marital ties.
Sylvia also paints a wonderful, vibrant picture of the Mardi Gras carnival and the gay community that she meets, with a sincerity and at times, a poignancy. Her characters are affectionate and wholesome, yet in contrast, the brutal murder of a transsexual is callous and serves to highlight the deplorable nature of some.
Mia's friend from the UK, Amanda, is on a personal journey, taking time out to enjoy a holiday with her friend and to decide what to do with her future. Mia stands firmly behind her, even when she makes some poor judgements, not condemning her decisions or criticising her. Who wouldn't want a friend like that? Mia is made of stern stuff and with her on your side you will not go wrong.
The novel is fast paced, realistic and gritty but also sensitive and well written. I grew to like Mia more and more, as the plot and her own character unfolded.
Mia too learns much in this book. At the end, there is a hint of what is to come next for her. Without giving away any of the story, I can say that I shall be waiting with baited breath for the next in this series.

(reviewed the day of purchase)
Jenny Peyton reviewed on Dec. 6, 2013

I won the paperback version of this book some time ago in a "Mia Ferrari Mysteries" giveaway, but I am also leaving a review on this site as the giveaway included a coupon for this site so I could share it with other friends.

This is the 2nd mystery in the series, and I enjoyed it just as much as the first. This time, Mia is dealing with a lot more than she bargained for, and all against the backdrop of the Sydney Gay Mardi Gras. I really loved some of the characters in this mystery, especially the flamboyant drag queens, and Mia's friend from the UK, Amanda!

I noticed in this story, Mia's character softens a little more. She's still as tough as nails, but she also puts herself in the other person's shoes. Not only this, but there is a lot of sexual tension building up between Mia and her arch-enemy, Detective Phil Smythe. Things are heating up for these two, but Mia refuses to acknowledge that the detective is perhaps not as bad as she believes him to be.

Again, like in the first novel, this is a fast paced, page turning mystery that will keep you guessing till the end.

Now, I can't wait until the next Mia mystery comes out. I'm officially a Mia fan!