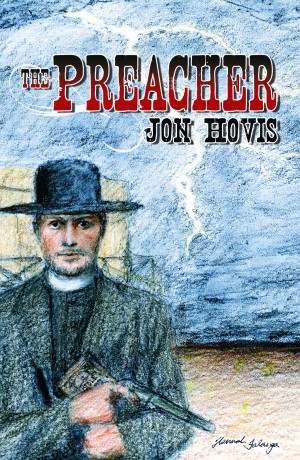 By Jon Hovis
THE PREACHER is an exciting story that follows an assassin bent on revenge after the death of his parents by Union forces. Trained to kill by none other than ‘Bloody Bill’ Anderson, the assassin is terrorizing the West. Deputy U.S. Marshal Jake Silver must hunt him down and bring him to justice before he kills again, and round up an entire network of criminal activity.
Available ebook formats: epub mobi pdf rtf lrf pdb txt html
First 30% Sample: epub mobi (Kindle) lrf more Online Reader
pdb
Price: $3.99 USD
Buy Add to Library Give as a Gift
How gifting works
Create Widget
Tags: colorado western jon hovis old west
About Jon Hovis

Jon Hovis is a writer of Western fiction and an associate member of the Western Writers of America, an organization which promotes the literature and authors of the American West. Jon has written two self-published books, The Feather Gang, and The Preacher, both featuring his protagonist Deputy U.S. Marshal Jake Silver. The Feather Gang is written as a traditional western story while The Preacher includes many historical facts although still a work of fiction. His third book, Silverton Gold, is newly released through Casa de Snapdragon Publishing, and features a Pinkerton Detective tracking down stolen gold and outlaws in the high country of western Colorado while showcasing the rich history of the area and mining life of the 1890’s.

Born and raised in Maryland, Jon grew up reading many genres of books including Westerns such as Louis L’Amour, and enjoying Western movies with stars such as John Wayne and Clint Eastwood. Moving to New Mexico as a young man, he now finds himself living in the west that he used to read about. Jon writes with a passion for the history and diversity of the Old West which is reflected in his books and personal life. Residing in the Southwest gives him inspiration for his stories with its diverse culture; from ancient Indian and pueblo societies, to the Spanish and Anglo influences, and a vast range of landscapes from the Rocky Mountains to the high deserts and wild river canyons.

Jon continues to live in New Mexico with his wife and daughter where he has worked in the semi-conductor industry, delivered mail for the postal service, and as a car salesman. Also a musician, he has played trumpet since his school days and now plays weekly in church and also sings in the choir. His many passions include hiking all over the American Southwest, exploring remote canyons, mineshafts, ghost towns and Indian ruins, caving and canoeing, and old steam trains. He still tries to find time to read and watch movies.

Reviews of The Preacher by Jon Hovis

You have subscribed to alerts for Jon Hovis.

You have been added to Jon Hovis's favorite list.

You can also sign-up to receive email notifications whenever Jon Hovis releases a new book.