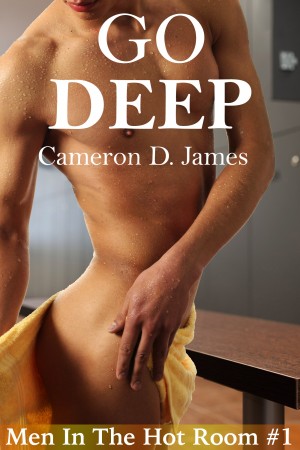 Rated 4.50/5 based on 2 reviews
Hot yoga turns scorching hot during an after-hours practice session. More
Men In The Hot Room #1

Hot yoga instructor Brad finds a tantalizing surprise when he closes up his studio for the day. Simon, a young yogi twink, is waiting for him in the hot room, preparing for tomorrow’s tournament. He asks for help, but soon Brad realizes this young man has a different sort of yoga in mind.

By the time they reach Poorna-Salabhasana, the hot room’s not hot enough. Brad teaches Simon how to relax, take it slow, and go deep, and Simon discovers the secret to mastering yoga.

Visit Cameron's website (www.camerondjames.com) to find out more about him.

Also in Series: Men In The Hot Room

This short story is about yoga instructor Brad and a guy (Simon) who wants the become the champion. Simon wants Brad to train him on his moves. The night before the competition the two men engage in some hot sex for the first time.

You have subscribed to alerts for Cameron D. James.

You have been added to Cameron D. James's favorite list.

You can also sign-up to receive email notifications whenever Cameron D. James releases a new book.