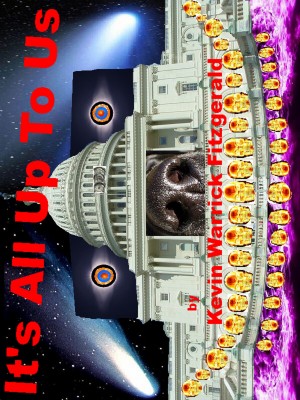 It's All Up To Us

By Kevin Warrick Fitzgerald
Rated 4.00/5 based on 1 reviews
Interested in politics? Sick and tired of the political corruption in this country? Follow Brian Connelly as he runs for the Senate, and wins! In Washington, he gets censured because he votes his conscience, so he runs for President. Once he gains in popularity, the true power broker feel threatened and multiple murder plots converge on him --- with a sweet love story intertwined into the plot. More
Saturday October 16, 2004

Brian looked out over his Secret Service barrier. Eight large men stood between him and his audience of forty reporters: thirty were seated and ten operated the video cameras on the far wall. Two agents stood on either side of him, four feet away. Ten more agents were out in the crowd, watching, waiting, on guard. The five other agents that had been assigned to him after the latest attempt on his life were pacing up and down between the reporters and the podium.

"I'd like to make a few statements, then I'll be glad to take your questions." He took a deep breath. "As you know, there have been several attempts on my life. From now on, I'll be staying at this hotel and speaking to you and answering questions from this podium. I'd be grateful if you would carry my message to the country from here. My traveling days are over, for obvious reasons." He paused and reestablished his handholds to keep himself from swaying.

He put everything he had into his words. "We are embarked on a great crusade. It cannot be won with one mighty stroke. This fight will be won by winning the majority of the battles. Battles can be lost, yet we can still emerge victorious. Victory is only achieved if there are enough of us that, should our banner be blown into the dust, another of us picks it up and carries it forth into the struggle. Should some of us not make it to the final victory, let their names be used as battle cries as we keep fighting until—"

A sharp explosion rang out. It was instantly followed by another.

Brian's chest exploded. An all-consuming pain engulfed him. The world tilted and keep turning. His vision turned white hot. He didn't realize that he was falling until he hit the floor. Through his agony he heard screaming and a great commotion. He rolled up in a ball, his arms over his chest.
Was that blood all over his front?

He concentrated on breathing.

Couldn't. No air would move in or out of his lungs.

He realized that that strange sound was his own gagging. He recognized Amy's voice cutting through the din, screaming and crying. He wanted to call out to her, to touch her, but couldn't move. His chest felt like two spears had transfixed his torso, shattering his ribs and shredding his lungs. He tried to inhale, then exhale.

Marshalling every scrap of self control, he gulped some air into his lungs. He blew it out and forced a little more down his throat. After a minute he was breathing in short tortured puffs. His lungs felt like molten glass.

Another minute found him breathing shallowly. Through the incredible ringing in his ears, he heard Amy talking softly to him, saying something he couldn't make out. Then everything went black and the pain blissfully vanished . . ..

. . . but his consciousness remained sentient. He was a disembodied entity floating in an eternal sea of blackness. No noise. No feeling. Just being.

Then something appeared. Oval. Blurry. It floated and bobbed up and down in front of him. He tried to pull it into focus. The more he tried, the more it eluded him. Then the image crystallized into the face of his father with that all too familiar red-eyed, slack-jawed, drunken expression. His old man opened his mouth to speak. Brian knew exactly what the old man was going to say and hated him all the more for it. But, all of a sudden, his father's eyes cleared and he looked profoundly pained, and he said, "Son, I'm sorry . . . for everything."

Something snapped deep inside Brian. "I forgive you, Dad!" he screamed into the universe.

The face smiled sadly and dissolved, and as he sunk more deeply into unconsciousness, Brian found an odd kind of peace that had always eluded him.

Mr. Fitzgerald lives south of Columbus, Ohio, and is hard at work on his next book.

If Chris Hedges, author of "Death of the Liberal Class," decided to write a book of fiction, this would be it. In this case, this author, K.W. Fitzgerald, has given us an unlikely protagonist who is facing long-odds in his quest to become President of the United States. What Brian Connelly has to say and to learn on his road to the White House is a clear commentary of current times, even though the novel is set in 2004.

I've not finished the novel yet. Still, even though I'm only 2/3rds through, the writing is crisp, the characters believable, and with plot development containing enough ups-and-downs to cause the reader to wonder what Washington next has in-store for Brian Connelly and his new spouse.

Brian Connelly's ideas and rhetoric will shock some; for others, the concepts will be entertaining fiction only. In any case, if a candidate ever emerges espousing these ideas, I suspect s/he will be marginalized by both of the parties pretty quickly. Else, would a Brian Connelly ever actually begin to succeed in his quest to reform government as described in this book, it is likely someone would monogram a bullet with that reformer's name.

You have subscribed to alerts for Kevin Warrick Fitzgerald.

You have been added to Kevin Warrick Fitzgerald's favorite list.

You can also sign-up to receive email notifications whenever Kevin Warrick Fitzgerald releases a new book.