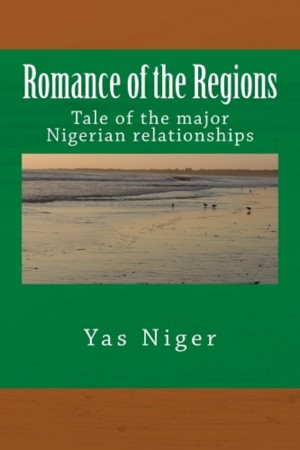 Romance of the Regions

By Yas Niger
Rated 4.00/5 based on 1 review
A Nigerian story that handles its three major regional identities with a very forceful bluntness. The unfolding tale takes a detached, yet associated view of three main characters. The narration lumps up the entire imagery of the three main Nigeria tribes and factions into these three characters. The nature of the intricate romance that plays out shows the appropriate immediate Nigerian situation More
Adudu Wa is the pretty, unmarried Yoruba girl, from an educated family. They are of a dominant almost coastal tribe, west of the Niger delta. A highly spirited ancient clan, loud in their presence, proud in their full culture and rich in their creativity as in their wealth, at home as abroad. She is too proud to be belittled. She stoops to take in the fine scenery of personal achievement, not caring about the calm but hapless folly she pointlessly embarks upon for outwards luxury.

She would worship any popularly revered deity in more ways than any particular divinity would conventionally approve of, and still contradict the tenets of the same faith without desecrating it. She would cross herself inside a mosque and only pray towards the east inside churches. She wouldn’t leave behind the tiniest string of her hair at her regular hairdresser’s, but repeatedly gives the strangest fetish weirdo tresses of her hair for rituals to fend off bad luck and eternally trap favour for herself, whether it is represented by a guy or some inanimate object.

Ewu Kwenu is a middle-aged single Igbo man, with wealthy prospects. He is an industrious half literate, culturally bond to his self-belief and emotionally attached to his fast eroding dominance. He gloats in the densely forested eastern lands he thinks he rules. He speaks English commonly but uses his native dialect as a sort of military code. He embodies the spirit of his proud dissident linage, made of strong willed people, incredibly hard to harness but easy to win over. In their customized nature they are mystical, traditional and religious, with a contagious bullish self-worth that made them appear very knowledgeable of western lifestyle.

Their passable use of the pidgin variety of English creates this impression. Their preference for being the only real users of their native dialect made them appear cultish in nature, with the sort of coded communication that secludes intentions in their major language, which is least spoken elsewhere. It is almost only spoken outside its origins by their kit and kin. This is their biggest weakness. It only made them industrious guests, meaningfully contributing to host communities, but less hospitable hosts to the contribution of others in their own few domains.

Arabiyu Ab’Arewamaliki is a lot younger. A multiply married Hausa lad with highly opinionated education that is as vast as it is rigid. He is of an obscure clan of commercially gifted tribesmen, settled in the arid sub-Sahara up north, above the married rivers Niger and Benue. He has enough formal education to call the bluff of western literacy’s perception of his faith’s suppressive rigidity, and act on it. He reveals he isn’t in the habit of being pretentious about the sacredness of his linage. His people are a rich stew of generations of dedicated heathens, tired of running away from slavers, drought and from their ceaseless petty tribal wars.

As the only still oddly fully committed spiritual idealist, they’re overwhelmed by doubt. The life he desires and preaches cannot run concurrently without one or two major flaws. His life as a Nigerian opts for the appropriate, as the immediate situation allows. He gets away with it because he truly needs the nationhood more than his fanatical independence.

Burdened by an enslaved free spirited reality, he helplessly watches the world educate him. He gets too knowledgeable in proven world literacy to deny his follies as he desires much more on earth than promised him in paradise, just like everybody else around him, he never admits.

Yas Niger is a Nigerian writer and poet with progressively traditional views. A trained educationist, activist and social media commentator who writes fictional works on contemporary African and world issues, advocating civilized virtues. With a preference for simple poetry and unconventional literary prose, he writes in a removed assertive manner, reflecting on everyday secular relationships.

Reviews of Romance of the Regions by Yas Niger

Romance of the region is a captivating tale of Nigeria and her interwoven tribes.
It tells a story of a love triangle between Adudu Wa, a Niger Deltan maiden from southsouth, Ewu Kwenu: a southeastan Igbo man, and Arabiyu: an Hausa from the north.

Adudu Wa is a fun-loving lady albeit a little naive, she didn't want to hurt neither Ewu nor Arabiyu but at the same time enjoyed romancing them. She enjoys all the attention she receives from both suitors and allows herself to be vulnerable, giving them a false hope they had upper hand – she clearly knows what she wanted but the men were oblivious to this as they were both consumed with the prospect of being with Adudu Wa

Ewu Kwenu pride himself as a hard working welder with a thriving metal workshop to show for it. His self esteem is tied to his earning power. Ewu fits the tribal stereotype of Ndigbo perfectly by being cheap - quick to retrieve all the engagement materials purchased for Adudu Wa when he was no longer sure he will be chosen over Arabiyu.

Arabiyu is smart and confident - too sure of his own skills of seducing yet another maiden despite having two wives under his belt. Interesting that despite being ‘skilled’ in the multiple wives department, Arabiya was the one who got ‘played’ the most as he was hit in the end unsuspecting.

I liked the way the author slipped in subtly the frictions that one encounters marrying from a different tribe in Nigeria. Sometimes the couple might be perfect for eachother but somehow the tribe concern will be raised just to highlight the differences that add nor take away any value from the union.

Arabiyu played her ‘card’ perfectly well - left her friend, the narrator in the dark for some part, got Ewu to blame himself for taking away engagement material, lead Arabiyu on until the day she moved away – yet, none of them seemed to have hated her for what she did.

Good read I must say, a little insights into the complexities of Nigeria tribes, in reality we are far more complex.

You have subscribed to alerts for Yas Niger.

You have been added to Yas Niger's favorite list.

You can also sign-up to receive email notifications whenever Yas Niger releases a new book.