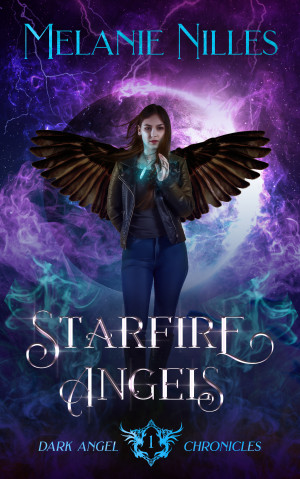 By Melanie Nilles
Rated 4.67/5 based on 3 reviews
Raea's life as a human is about to end. The crystal shard she bears is not a pretty pendant; it's part of the heart of a machine capable of destroying whole worlds. Those who desire the power have sent an agent to find her, but she's too busy evading a nosy reporter, dating a hot new foreign student, and learning what she really is. Only one person on Earth can help her, but he's not from Earth. More
They've been coming here for thousands of years, using Earth as a sanctuary to escape threats from their own kind. Mankind knows them as angels, and one of them left a child upon her death to be raised as a human.

Raea is now a high school senior, and her life as a human is about to end. The crystal shard she bears is not a pretty pendant; it's a collective of powerful entities who chose her as their Keeper, a protector of one of the four shards that power a machine capable of destroying whole worlds. Those who desire the Starfire's power have sent an agent to find her, but she's too busy evading a nosy reporter ready to exploit her secret and dating a hot new foreign student to notice. Nevermind learning what she really is.

Only one person on Earth can help her, the last person she ever expected. But he's not from Earth. Life as a human would be so much easier.

Melanie Nilles writes a variety of science fiction and fantasy, including the romantic Starfire Angels series, Adronis series, The Luriel Cycle trilogy, and other romantic-leaning titles. As M. A. Nilles, she publishes darker science fiction and fantasy, including the Demon Age series, Legend of the White Dragon, and Starfire Angels: Revelations series. For updates, visit her website a www.melanienilles.com.

About the Series: Dark Angel Chronicles

Raea is your typical high school student that soon finds out that she is not who she thought she was. This is a wonderful coming-of-age story with a masterful twist on the idea. The twist… well one morning Raea finds out that she had grown wings over night! At first she tries to hide it from everyone, until she realizes that she’s gonna have to trust her aunt with it. Turns out she already knew and so does the crazy introverted boy who lives next to them, except he’s no ordinary human. He to comes from the same planet as Raea. To top things off, Raea has to contend with the starfire entities who live in the necklace that Raea wears. The starfire entities grant her perfect memory, and share with her their collective memory, which serves to give her needed information at critical times in the story. In return Raea is their keeper and charged to keep them save and out of the hands of the bad guys. Enter Palin, who is a handsome popular foreign exchange student boy that all the girls love. Palin takes a liking to Raea, and well let’s just say that he’s not the best thing that’s ever happened to her.

The story line overall was refreshing and the ideas were knew and interesting. The story moved along at a good pace, with good cliff hangers at vital points in the story. My favorite character was actually Josh, who is Raea’s best friend. He is a trustworthy character, and oh so gullible, in essence the comic relief to all the seriousness that Raea is going through. If it wasn’t for Josh, I would probably not have finished the story. I like to laugh every now and then when reading a good book. The book was easy to read and definitely age appropriate for tweens and teens.

If you enjoy fantasy with romance thrown in to the twist of things, you’ll enjoy this book. Otherwise, you should look elsewhere.

This is a romance that I enjoy reading and which means it doesn't come with a formula. It has some wonderful character development and builds up nicely, but I felt there were places where the story jumped emotional tracks a bit too quickly. Then again, teenagers aren't exactly known for their stability in this area so that could be accurately written. The bad guy is shown to be very bad, but only past the magical point when he turns into possible marriage material into the Nasty Evil Bad Guy. I thought he was a relatively decent villain in the story, but really didn't complement the hero and heroine as well as I hoped. I also felt he turned a bit stupid near the end, which is fine for the story but didn't give me a satisfying end.

The world development ended up thrilling me. I like the "us verses them" and everyone lying to show their point of view. The manipulation of humans, the press for the "better story" of the nosy reporter, and everything else built up to a nice story. There are multiple languages, though notationally translated, which I like since I prefer stories when everyone doesn't speak perfect English. The grammar structure of the aliens was a bit too... broken for me. Almost forced when it could have been done with a slightly different structure and still given a flair for the exotic.

The writing style is nice, but not as tight as I wanted it to be. Some of the descriptions came off a bit rough to me and there were a few turns of phrase that pulled me out of the story. but only in a few places. Outside of those points, I found myself reading it easily and it held a nice cadence of style that I finished it in a few hours. And, since I consider reading speed to be one of those things I use to measure my ability to get lost into it, I liked it.

i had this book recommended to me by the authoress herself. She caught my interest immediately with the fact that it was a YA and a series.. it's a captivating story about those wonderful teenage years we all go through with a bit bigger problem than about ANY you'll ever find in high school years. it's fabulous and def. keeps you guessing the entire time. I also have to say the authoress shows true in this book as well. Truly talented.
Thank you for leading me to this book.

(reviewed 23 days after purchase)
Ed Maher reviewed on Sep. 15, 2009
(no rating)
Enjoyed story concept and how it developed each of the chacters. Would like to see sequel. The dialogue was easy to follow, especially on the iPhone. Looking forward to next iBook.

You have subscribed to alerts for Melanie Nilles.

You have been added to Melanie Nilles's favorite list.

You can also sign-up to receive email notifications whenever Melanie Nilles releases a new book.